After an extra-long Thanksgiving/Christmas break I've been happy to return to the Dallas Symphony, which is preparing a traditional Viennese gala for New Year's Eve guaranteed to warm any Habsburg nostalgist's heart. One piece, the "Seufzer-Galopp" (Sighing Galop) by Johann Strauss Sr (1804-1849), requires the musicians to sigh audibly at various moments. I will be sighing for the Austro-Hungarian Empire!

In between rehearsals today I luckily ran into two colleagues who reminded me that the Dallas Museum of Art's exhibit The Mourners: Medieval Tomb Sculptures from the Court of Burgundy, which I had not yet seen, would be closing Sunday and so the three of us hurried over to view it. The exhibit features forty remarkable sculptures from the tomb of John "the Fearless" Duke of Burgundy (1371-1419), normally housed in Dijon but currently appearing on loan in the US. The somber figures are so real, one can easily imagine them crying or their robes blowing in the wind as they move in their Duke's funeral procession. Reading the explanatory texts, which mentioned how tombs like John's were vandalised during the French Revolution, I could not help but be overcome with anger at how much was lost during that terrible time. We are fortunate however to be able to still witness as much of the glorious cultural patrimony of monarchical Europe, of which these statues are an eloquent example, as we can.

For this monarchist it was moving and thought-provoking to juxtapose the seemingly disparate experiences of rehearsing 19th-century Viennese orchestral music and examining 15th-century Burgundian sculpture. After all, the Habsburgs whose capital resounded with the sounds of Strauss waltzes and polkas were descended from the Dukes of Burgundy, whose last heiress Maria (1457-1482) paved the way for the great Habsburg Empire with her marriage to Emperor Maximilian I (1459-1519) in 1477. The cheerful music of Johann Strauss and the tragic sculptures that surrounded the tomb of John the Fearless may project opposite moods, but they both reflect the incomparable richness of true European civilisation, too often today obscured by modernity and republicanism but still accessible when one looks for it.
Posted by Theodore Harvey at 4:56 PM No comments:

With the birth of a daughter yesterday to Peter & Autumn Phillips, HM Queen Elizabeth II and HRH the Duke of Edinburgh are great-grandparents (and HRH the Princess Royal a grandmother) for the first time. Miss Phillips, whose name has not yet been announced, is 12th in the Order of Succession to the Throne. Once again the Royal Family spans four generations, as it did prior to the death of Princess Alice Duchess of Gloucester (last by marriage of the generation of Windsors senior to that of the Queen) in 2004. (Between Peter Phillips's own birth in 1977 and the death of Princess Alice Countess of Athlone in 1981 the Royal Family--broadly defined--spanned five generations!) Congratulations to the Phillipses and all the Royal Family!

Recently the New York Times reviewed two books that I'd bought and read (Katie Nicholl's William & Harry: Behind the Palace Walls and Deborah Duchess of Devonshire's memoir Wait For Me!) as well as a book that I requested for Christmas and look forward to reading (Thomas B. Allen's Tories: Fighting for the King in America's First Civil War). Nicholl's book was entertaining but some bold assertions and implausible claims (such as the one that Lady Diana Spencer "vividly remembered" her parents fighting over the lack of a male heir despite the fact that she was only 2 when her brother Charles was born) made it hard for me to take seriously. I loved the Duchess of Devonshire's memoir, though I would have to agree with the reviewer that it had its occasional tedious moments.

Here is a brief interview with Deborah Devonshire (via Gareth Russell).
Posted by Theodore Harvey at 12:29 PM No comments:

The Daily Mail reports that scientists have identified a skull as being that of King Henri IV, one of France's greatest and most popular kings, who was tragically assassinated in 1610.

The last paragraph is a pleasant surprise. A "national mass" for Henri IV? I wonder how that will go over. It is true that of all the Kings of France Henri IV has always had the reputation hardest for republicans to destroy, as he was so clearly successful and benevolent. I sometimes wonder if France might have taken an entirely different (and better) long-term path had he not been assassinated and lived until after his son Louis XIII reached his majority.

After years of planning and months of anticipation, the definitive cinematic treatment of one of the 20th century's great unsung heroes King George VI has arrived in movie theatres, at least in New York (where I have the good fortune to be vacationing at the moment) and Los Angeles. I am pleased to report that Tom Hooper's The King's Speech does not disappoint. Colin Firth, though not very similar in appearance to George VI, gives the performance of a lifetime as the insecure monarch who with the aid of unconventional Australian speech therapist Lionel Rogue (Geoffrey Rush in an equally admirable performance) overcomes a terrifying stammer to become an inspiring wartime leader as Britain enters World War II. Firth perfectly captures his character's discomfort, making the audience feel it painfully just as those who witnessed the young Duke of York's early attempts at public speaking must have done. The relief and pride when he finally manages to get through a broadcast without stuttering is thus all the more palpable.

A rather closer physical likeness is achieved with the brilliant casting of Helena Bonham Carter as Queen Elizabeth (later known as the Queen Mother). For those of us who remember HM only as an elderly lady (albeit an exceptionally vibrant and lively one), it is refreshing to see her early years in the public eye portrayed as appealingly as Bonham Carter does. Of course, "Bertie" and Elizabeth never expected to be King and Queen; they were thrust into the position only by the abdication of his elder brother Edward VIII. For someone generally inclined to give royalty the benefit of the doubt, I've always held a rather low opinion of the king who abandoned his duty to marry a twice-divorced American woman, but never have I hated him more than in a particularly painful scene in a wine cellar when he taunts his younger brother. Guy Pearce (as the closest this movie comes to a "villain") must be given credit for believably conveying Edward's selfishness and callousness. I had the same reaction to Eve Best as I always have towards the real Wallis Simpson, namely, "Why?"--which means that she did her job. And Michael Gambon is much more convincing as King George V (mercifully with an untied beard) than he's ever been as Albus Dumbledore.

I can think of only two criticisms of this splendid film. One is a complaint that only a musician would make: as much as I normally love the powerfully tragic second movement of Beethoven's Symphony No. 7, I thought it was a bit odd to choose music by a German composer for the climactic scene in which the King, having finally mastered his speech impediment, addresses the nation on the outbreak of war with Germany in 1939. Surely either an original composition or something by a British composer (perhaps Elgar's "Nimrod") would have been more suitable. The other minor complaint is that Timothy Spall as Winston Churchill seems to be delivering more of a caricature than a real performance, as if he's impersonating a Churchill impersonator. But compared to the movie's countless strengths these are minor quibbles indeed. These strengths lie not only in the cast but also in the sets and costumes which bring a previous era (in this case the 1920s and 30s) to life as only the best period films do, the closest to time travel we are ever likely to experience. This is definitely a movie that should be seen on the big screen, not delayed until release on DVD, though I will probably buy the DVD when it comes out.

One point that non-monarchist reviewers are unlikely to make is how this movie highlights the way in which one of hereditary monarchy's perceived weaknesses can become one of its greatest strengths. Critics of monarchy complain that it involuntarily elevates individuals who are not necessarily particularly suitable for public life, and it is true that a man with George VI's handicap would have been unlikely to choose to pursue a career in politics and even more unlikely to succeed at it. Yet in the end King George VI did succeed beyond anyone's expectations, becoming not just an adequate but an exceptionally heroic head of state whose resilience (with that of his wife) was an essential component of British resistance in one of the most difficult periods of her history. There is a true nobility in his triumph which would be absent from a world in which prominent political roles were limited to those naturally gifted at public speaking. Edward VIII, once perceived as the flashier and more impressive brother, truly was unsuitable, but the point is the system worked; in the end Britain got the King she needed in her darkest and finest hour. And those of us who are committed to the preservation and restoration of hereditary monarchies can take pride in our allegiance to the only system of government that makes stories like the one told by this excellent film possible.
Posted by Theodore Harvey at 1:34 PM No comments:

Today at the mall I had to wonder if I had ever really "grown up," after wandering into a toy store, seeing the "Knights' Empire" Playmobil castle, and realizing that deep down I wanted it. Perhaps republicans are onto something (but not quite what they think) when they say monarchists need to "grow up," though that only proves how dismal their creed is. Children are natural monarchists; only adults who have lost any sense of childlike wonder could invent something as pedestrian as republicanism. To be a monarchist is to insist that there really is more truth in fairy tales than in the American Declaration of Independence. And that's nothing to be ashamed of. 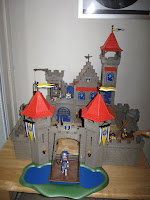 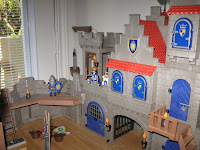 [Update: About a month after writing this post, finding that I couldn't stop thinking about the castle, I finally gave in to my inner child and bought it. Above are a couple pictures, taken in January 2011 after I put it together. Note that this particular model is no longer available from Playmobil.]
Posted by Theodore Harvey at 4:30 PM No comments: