Hereditary Prince Alois, Liechtenstein's acting head of state since 2004, has threatened to leave the country if Liechtensteiners pass a referendum eliminating his ability to veto legislation.  While I wince a bit at the risk inherent in such a threat, I admire Prince Alois's bold stand in defense of the rights of the last remaining ruling (as opposed to merely reigning) hereditary monarchy in Europe.  Don't Liechtensteiners know how lucky they are to live in a country that has not yet completely surrendered to the inane and overrated god of "Democracy"?  Fortunately, it seems that many do.  Member of Parliament Renate Wohlwend supports the Prince and his powers.  '"I don't like to call them powers," she explained. "I think of them as rights and responsibilities, and this mix of monarchy and democracy creates the right kind of balance for a small country like Liechtenstein."'  So perhaps wisdom and tradition will prevail.  Long live Prince Hans Adam II, Long Live Prince Alois, and Long Live the Principality of Liechtenstein!

Posted by Theodore Harvey at 5:42 PM No comments:

I wasn't always so anti-American.  I even voted in the 1996 and 2000 presidential elections, and in the 2008 primaries, before concluding that "the system is the problem, and there is no way to vote against the system."  But revelations like this only confirm my bitter resentment of the the regime in Washington, whichever rotten party is in control of it.  Neither the Democrat Clinton nor the Republican Bush had any respect for British sovereignty or other countries' national sovereignty in general.  The U.S. Presidency is one of the leading enemies of truth, peace, and tradition in the world today.  It does not deserve one iota of the respect usually accorded to it as an institution, and I will not implicitly endorse it by participating in its inane and pointless rituals every four years.
Posted by Theodore Harvey at 10:44 AM 2 comments:

Return of the Kings

I'm back in the United States after a uniquely memorable trip to the United Kingdom (my sixth) during which I enthusiastically celebrated the Queen's Diamond Jubilee with great views of every event, met a number of fellow royalists I had previously known only via the internet, attended a fascinating conference on the history of the monarchy at Kensington Palace, went on a Tudor history tour focusing on Executed Queens (Anne Boleyn, Catherine Howard, Jane Grey, and Mary Stuart), celebrated the Queen's official birthday (Trooping The Colour), and generally had a wonderful time.  I'm not sure what else to add here to what I posted on June 5, which was undoubtedly the highlight.  Another valuable aspect of this trip was the opportunity to attend a variety of religious services at some of the leading Anglican and Roman Catholic churches of London and Cambridge, all of them integrating beautiful music into the liturgy, my list of which is online here.

Meanwhile, looking beyond Britain, my friend Charles Coulombe offers this excellent article "Return of the Kings" on the future of monarchy in Europe. The success of the Diamond Jubilee, with millions in London and throughout the UK and the world joining in the celebrations, demonstrated that the popularity of the British monarchy is as secure as it has ever been.  Why shouldn't the inhabitants of those currently republican countries which once enjoyed splendid royal traditions of their own  be inspired to restore their monarchies, providing them with opportunities for the incomparable joy and unity this month's glorious events gave to Britain? 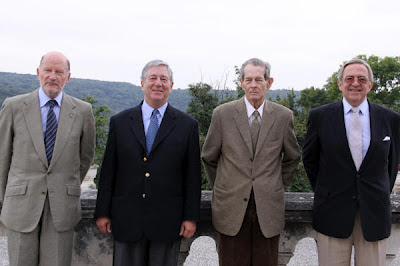 (The four men who should be ruling the Balkans: King Simeon II of Bulgaria, Crown Prince Alexander of Serbia, King Michael of Romania, King Constantine II of Greece)

Posted by Theodore Harvey at 5:02 PM No comments: 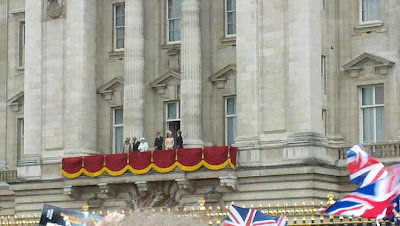 I will never forget for as long as I live this incomparably glorious day...from arriving at the Mall by 7:00 in the morning and securing a prime spot in the Mall in the front row behind the barrier near Clarence House, to catching a first glimpse of the Duke and Duchess of Cambridge as they left for St Paul's, to waving at (and identifying a few of) the extended royal family as they passed by in buses, to the incredible thrill after waiting for hours of finally seeing first the Queen (with the Prince of Wales and Duchess of Cornwall) and then William & Catherine and Prince Harry pass by in their open-topped carriages despite the rain, somehow photographing them despite tingling and trembling and screaming with excitement, and finally surging towards the Palace, that citadel of majesty, the centre of any Anglophilic royalist's universe, with a perfect view of that one and only balcony, as the Sovereign and her heir's immediate family emerged to the thundering roar of the crowd and the Royal Air Force flew past above. Truly this was the event of a lifetime, marred only by the unfortunate absence of an ill Prince Philip who I wish could have been there and who I hope will swiftly recover. God Save the Queen! 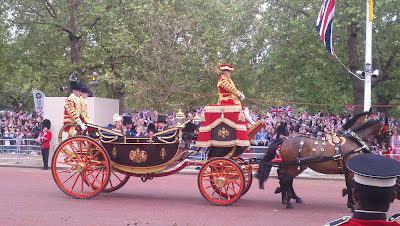 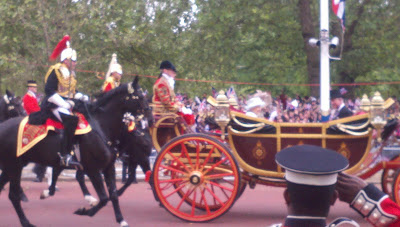 Posted by Theodore Harvey at 12:49 PM No comments: