Today is the 20th birthday of my website!
It was on September 29, 2000, shortly after beginning graduate school at Juilliard, that I signed up with Angelfire, beginning with a number of royal charts and lists I'd already compiled. Originally the URL was awkwardly long and my pages carried unrelated ads; I purchased my unique domain in 2004. The style hasn't changed much in 20 years; I've never been an artsy web design person and it retains something of a "primitive" late 20th century feel, though there's a lot more content, including color images, now than there was. I launched my forum in 2006 and this blog in 2008, both still available from the main page. While in recent years I've devoted more monarchist energy to social media, I still keep it updated as best I can, having maintained it from addresses in New York, Miami Beach, Charlotte, and Dallas, and all over the world when traveling. I've always enjoyed hearing from visitors who appreciated the site, some of whom are now friends.
(I learned while typing this that the Emir of Kuwait has died, so that will be my next update.)
Both the world of royalty and the world in general have changed considerably since September 2000; when I started my website from the Juilliard dorm computer lab, the World Trade Center towers were still standing a few miles south of me, five of Europe's ten current hereditary monarchies had different sovereigns than they do today (two of whom are now deceased), Nepal still had its monarchy under King Birendra, and luminaries like Queen Elizabeth the Queen Mother, who linked the age of the internet to the Victorian era, were still alive. I like to think that for those who care about its subject matter I've provided a little corner of constancy in an often bewildering world.
Posted by Theodore Harvey at 9:50 AM 1 comment:

I don’t know why some people in online discussions think assertions of counterfactual history—which by definition no one can either prove or refute—constitute valid moral arguments.
“Hawaii would have been conquered by Japan eventually anyway”
You can’t prove that, and so what? The republican coup and US annexation were still wrong.
It is reasonable on the other hand to argue that the abolition of the German and Austro-Hungarian monarchies in 1918 paved the way for the rise of Nazism and the subsequent expansion of Communism. This can be demonstrated with facts and logic. Had the monarchies survived, their peoples might have been spared a great deal of suffering. But counterfactual scenarios, however enticing (and no one wishes 20th century European history had proceeded differently more than me), are not the core of the moral argument.
I believe that the abolition of an ancient monarchy, let alone dozens of them at once, is wrong in itself, regardless of consequences. It is an offence against obedience, tradition, patriotism, aesthetics, the foundation of all previous legality, and the divine order. And that is why restoration is a moral imperative even after the most obvious negative consequences have subsided. Modern Germany and Austria, and the other lands that once made up the Habsburg Empire, may be decent places to live in a narrow materialistic sense, though it took over three decades in the West and seven in the East after the falls of the monarchies for that to be the case, with unprecedented horrors along the way. But there is more to life than materialism.
We cannot bring the dead back to life. But when something wrong was done, no matter how long ago, that can be reversed, it must be. And that is why I will insist as long as I draw breath that the occupation of Germany, Austria, Hawaii, and other countries that used to be monarchies by republican regimes is intrinsically immoral, because it constitutes an injustice that though it could be has never been corrected.
Posted by Theodore Harvey at 10:04 PM 7 comments:

Germany and the Hohenzollerns

CNN: Germany's ex-royals want their riches back, but past ties to Hitler stand in the way

To single out the royal family and deny them their property seized by the equally evil Communists when the ancestors of millions of ordinary Germans also supported Hitler in the beginning is grossly unfair. (The article does not mention that Crown Prince Wilhelm soured on Hitler after his friend Kurt von Schleicher was murdered in the Night of the Long Knives in 1934, before most people did.) Germans should be bowing to their Kaiser, not “negotiating” with him. But I want Prince Georg Friedrich to be given back his throne, not only his property. It is republicans, not the royal family, who should be blamed for the rise of Hitler, which was only possible in the context of the vacuum created by the stupid and evil abolition of the monarchies. Still, this is a more thorough and balanced article on the Hohenzollerns than one would normally see in the American media. (Be sure to watch the video, with beautiful footage of Hohenzollern Castle.)

I can’t stand the way that virtually all mainstream commentary on 20th century German history treats the 1918 fall of the monarchies and 1919 establishment of the Weimar Republic as a good thing that all Germans should have immediately embraced, as it those who didn’t were the problem. No. Republicanism is cancer and the Republic was and is the problem. Crown Prince Wilhelm had every right and even the duty to seek the restoration of the monarchy, though as he eventually realised himself he was wrong to put any trust in Hitler. No country has the right to abolish its monarchy, let alone multiple monarchies as happened in Germany in 1918, which with all due respect to 2020 remains the worst year in history. It is those who thought Germany could manage without kings and princes who are to blame for the rise of Hitler, for they created the vacuum that facilitated it. As C.S. Lewis put it, “spiritual nature, like bodily nature, will be served. Deny it food and it will gobble poison.” 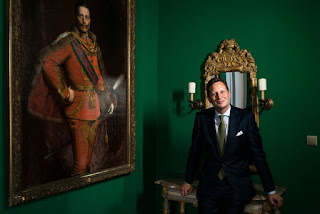 Posted by Theodore Harvey at 11:47 AM No comments: 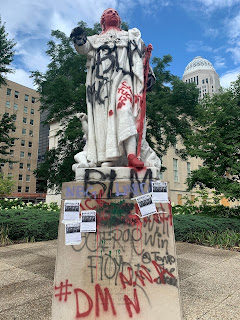