Last night's thunderstorm project: a chart of European royalty in 1898 to go with the Corpus Christi Vienna photo I posted on Facebook yesterday. This one is different from other similar pictorial charts I've made in that almost all of the pictures come from the same source: Die souveränen Fürstenhäuser Europas (1898-99), giving it a certain stylistic and chronological consistency. The only exceptions are Empress Elisabeth of Austria (1837-1898) and Grand Duke George of Russia (1871-1899), who both died before the second volume was published (it depicted only living people) but had to be included to keep to the June 1898 theme.

Until the shocking murder of Empress Elisabeth in Geneva that September, royal assassinations (apart from that of Alexander II of Russia in 1881) in Europe since the end of the French Revolutionary era had been quite rare; European royalty could be fairly confident they would die of natural causes. However, from then on major royal assassinations became disturbingly frequent (1898, 1900, 1903, 1905, 1908, 1913, 1914), culminating in the horrors of the Russian Revolution two decades later. (It's perhaps worth noting that during the same era presidents of the world's two leading republics, the USA and France, were assassinated in 1865, 1881, 1894, and 1901.) So the summer of 1898 can be seen as the tail end of a relatively calm time, though Europe would enjoy sixteen more years of general peace before the real apocalypse.

For absolute pictorial consistency an 1899 version is here; by then, no thrones had changed hands but the monarchs of Denmark, Austria, and Bulgaria had all been widowed, and the Tsar had buried his beloved younger brother. 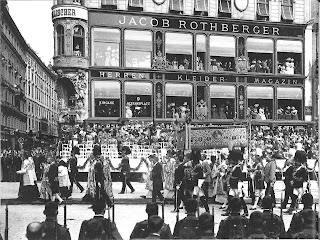 Posted by Theodore Harvey at 1:58 PM No comments:

Return of the Kings?

An unusually optimistic article on the future of Monarchy from a mainstream source. Let's hope the answer is Yes! Bravo Ed West!
Posted by Theodore Harvey at 11:45 AM 1 comment:

As I was preoccupied last weekend with a New England trip, I neglected to post about Prince Alexander of Yugoslavia (1924-2016), who died last Thursday. I've been following royalty for so long that I remember when his mother Princess Olga (1903-1997), sister of Britain's previous Duchess of Kent and a famous beauty in her youth, was still alive. His father Prince Paul (1893-1976), a patron of the arts and friend of author Robert K. Massie to whose "Nicholas & Alexandra" I owe so much, was Regent for the young King Peter II from 1934 to 1941. Prince Alexander now finally joins his younger brother Prince Nicholas (1928-1954) who was tragically killed in a car crash. He was buried yesterday in Oplenac. May he rest in peace.
Posted by Theodore Harvey at 12:22 PM No comments:

Endorsement definitely not implied. An irritatingly snarky, irreverent article (not surprising from this source, which can't even spell "Prince Philip" correctly) that I nevertheless can't ignore. These claimants and many more are exactly what the world needs. It's not pleasant to be continually reminded of how much contempt fashionable opinion has for my most deeply felt beliefs. If I occasionally raise eyebrows by straying into other issues, it's partly because I can't stand it that these days monarchism is more likely to be ridiculed than denounced.
Posted by Theodore Harvey at 9:30 PM No comments:

I know I haven't been blogging recently, despite a fair amount going on in the world of royalty, notably the 90th birthday of HM Queen Elizabeth II last month. I'll admit I've developed a tendency to say all I have to say on Facebook and neglect this blog. However, I do have a new addition to my website: this chart of Monarchs, Consorts, and Heirs of the World, complete with heraldry and pictures. Looking up the info on the non-European consorts and heirs was interesting, though frustrating in a few cases. Let's just say I'm fonder of some of these monarchies than others. If anyone is still reading this blog, I hope you find this page a useful resource.
Posted by Theodore Harvey at 10:05 PM 2 comments: