I was going to reproduce this July 5 Facebook post here, but forgot to do so until now. If anything, attending the "Enlightened Princesses" exhibit at Kensington Palace on Sunday strengthened my commitment to the Hanoverian succession. 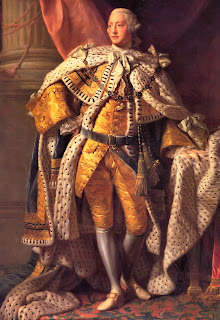 Every year on July 4, online discussions of the American Revolution bring out not only Tories like me, but zealous internet reactionaries (one seldom encounters these people in real life) who after more than 300 years still stubbornly deny the legitimacy of the Hanoverian succession, forming a sort of unholy alliance with conventional republican defenders of the Revolution in denying that George III and his successors have been lawful monarchs at all. (A particularly extreme version I encountered yesterday rejects all English and British monarchs since Pope Pius V excommunicated Queen Elizabeth I in 1570.) Unsurprisingly I tend to get cross with these people (whose views are not required or even supported by actual Roman Catholic teaching), but not only because of my attachment to the present Queen.
I understand the appeal of the 18th century Jacobite cause, and as a member of the board of trustees of the [American] Society of King Charles the Martyr can hardly be considered an enemy of the Stuarts. I believe I would have sided with James II in 1688. But as my irritation with modern hardline Jacobites has grown, I've realised that I am utterly unwilling to concede that the British Monarchy as it has actually existed since 1714 is any kind of inherent disappointment or lesser evil.
There is nothing wrong with fantasy. But I believe that monarchism necessarily involves supporting real monarchies, which from time to time (not only in 1688/1714) have undergone irregularities in succession. The truth is, I love the close relationship between British and Protestant German royalty that flourished for exactly 200 years (1714-1914), not coincidentally corresponding to the peak era of British power and achievements. That relationship is essentially the foundation of the modern royal genealogy I take pride in having memorised, and inseparable from traditional concepts of Britishness (as opposed to mere Englishness or Scottishness) now endangered on multiple fronts. I don't think it's hyperbole to assert that the agony of the 20th century, and the root of much of what is wrong with the modern world, is ultimately the breakdown of that Anglo-German relationship: the failure of the cozy Victorian dream in which courts all over Germany--Hanover, Prussia, Coburg, Hesse, Württemberg, Mecklenburg-Strelitz--maintained close family ties to the little old lady in Windsor Castle.

Obviously for some the West has been at least partially on the wrong track since 1517. But for me, as a pan-monarchist Tory Anglican, Britain lost her way not when she imported a sovereign from Hanover in 1714, but nearly two centuries later when in stark contrast to the brilliantly successful policies of the 18th and 19th centuries, she drifted away from Germany into the arms of the regicidal French Republic. I refuse to believe that this rupture was inevitable, and I mourn its consequences. And I will never apologise for my loyalty to King George III of the House of Hanover and his heirs and successors.

🇬🇧
Posted by Theodore Harvey at 4:39 PM No comments: