As I celebrate the twelfth anniversary of my website, created on this date in 2000, it's worth reflecting on the meaning of the word it's all about.  One problem that monarchists sometimes run into, especially in online discussions, is defining exactly what a "Monarchy" is.  While I regard a hereditary element as normative, there are non-hereditary exceptions (Vatican City, Andorra, Samoa) that have to be acknowledged.  Particularly galling is when republicans want to claim horrible dictatorships such as North Korea (which has now had leaders from three generations of the same family) as "Monarchies."  But the definition at Wikipedia's article on Monarchy, which is much better than it used to be, is about the best I've seen: "A monarchy is a form of government in which sovereignty is actually or nominally embodied in a single individual (the monarch)."  (I might change "actually or nominally" to simply "officially.")  This manages to cover unusual cases such as Vatican City while excluding superficially "hereditary" authoritarian republics.  Since nominally republican regimes like those of Belarus, Syria, and North Korea still claim to embody sovereignty in "the people," they are not monarchies, no matter how absurd that claim is, and monarchists do not have to answer for them.  (Even Nazi Germany never formally repealed the 1919 constitution of the Weimar Republic.)
Posted by Theodore Harvey at 11:40 AM No comments:

Spain's traditionally popular King Juan Carlos has been under more pressure than usual lately, reports the New York Times, though as his supporters point out, he continues to work hard from Spain facilitating beneficial business deals that would not happen without his international connections.   Spaniards need to remember how lucky they are that their country's ancient and brilliant monarchical tradition has survived (unlike that of neighboring Portugal and France, both now mired in more than a century of republican darkness) and rally to their King (the only 20th century European monarch to successfully steer his country from the bitter legacy of civil war and dictatorship to a relatively stable parliamentary democracy) and his successor the Prince of Asturias.  Viva el Rey!
Posted by Theodore Harvey at 12:23 AM No comments:

The Queen and her Abbey 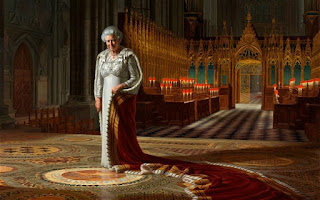 Australian artist Ralph Heimans has unveiled in Canberra his striking new official portrait of the Queen at Westminster Abbey, with the sovereign apparently pausing in reflection at the very spot where she was crowned in 1953.  Having had the honour to sing services (in 2009 and 2011) in those choir stalls, I was moved by the choice of setting as well as the way Heimans has captured Her Majesty's expression and sense of place in history.  For musical Anglican monarchists, everything we believe in is represented in this beautiful painting.
Posted by Theodore Harvey at 11:12 AM No comments:

Though in London at the time, I missed this unique and moving tribute to the Queen (featuring previously unseen footage) by her son and heir the Prince of Wales when it aired on June 1, and did not know it was available on YouTube until today.  Well worth an hour of your time.

Posted by Theodore Harvey at 11:06 AM No comments:

Despite a certain incident with a French magazine, the Duke & Duchess of Cambridge's tour of Singapore, Malaysia, the Solomon Islands, and Tuvalu (concluding with a brief stop in Australia) was a triumphant success, the Telegraph and Mail report.  I love these joyful videos of their welcome and departure in Tuvalu, not least because they must make leftist anti-imperialists cringe.  God bless the people of Tuvalu and their wonderful future King and Queen.

Posted by Theodore Harvey at 5:49 PM No comments:

The Duke and Duchess of Cambridge, moving on to Malaysia, attended a glittering dinner as guests of the Yang di-Pertuan Agong and his wife the Queen.  Official visits are so much more exciting when both hosts and guests are royal!  The Duchess also made her first overseas speech.  Probably the most moving moment, however, came when she brightened the day of a 15-year-old leukaemia patient whose mother had feared she would not see him smile again.  This is royalty at its incomparable best, caring for the suffering as conscientious princesses have done for hundreds of years. 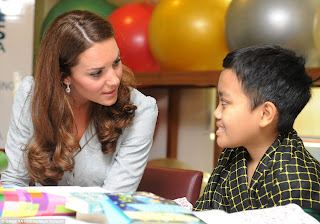 Posted by Theodore Harvey at 1:55 PM No comments:

Archaeologists from the University of Leicester believe they may have found the remains of King Richard III (1452-1485), the last English king to die in battle.  I am unsure whether Richard III has been unfairly maligned regarding the mysterious fate of his unfortunate nephews, but this looks like a remarkable archaeological achievement nonetheless. Visiting the Bosworth Battlefield site this summer, including the well from which Richard allegedly took his last drink, was a moving experience.  In retrospect it was there, with Richard, that the English Middle Ages ended and the early modern era began (whether for good or ill) with the accession of the Tudors and all that their reigns would mean for English identity, culture, politics and religion.  It's perhaps with that in mind that Ed West suggests a state burial in London if the remains are indeed his.  (Update 19 Sept: Chris Skidmore MP elaborates; Gareth Russell demurs.)

Back in December I reported on the engagements of brother Archdukes Imre and Christoph of Austria-Hungary.  In what must have been a first for the American capital, Archduke Imre's wedding to American Catholic writer and activist Kathleen Walker took place on Saturday, September 8, at St Mary Mother of God Catholic Church in Washington DC.  Many of the groom's royal relatives attended, including his Luxembourg cousins and the Duke & Duchess of Braganza (de jure King & Queen of Portugal).  The wedding itself, reported in the Washington Post, seems to have been a splendidly traditional celebration with a Latin Mass and music by Schubert, concluding with Haydn's Austrian Imperial anthem.  Pictures are available at Royal Musings, Revue, Tageblatt, and Spiering Photography.

One would think that everyone interested in royalty would be united in wishing the newly married couple happiness, but unfortunately that has not been the case.  In certain corners of the royal-watching internet, to which I will not link, some people have not been able to get past their disagreements (to put it mildly) with the deeply held religious and moral convictions of the bride, who has been active in the anti-abortion movement.  This blog generally avoids taking explicit stances on such divisive contemporary issues and recognizes that monarchists can disagree on such matters.  However, I have been dismayed by the sheer meanness of some of the comments I have seen.  How can anyone find it at all surprising that a member of Europe's greatest Catholic dynasty (long known for its defense of the Church), a great-grandson of the Blessed Emperor Karl who was beatified by the staunchly pro-life Pope John Paul II, would marry a woman who actually believes in Catholicism and takes it seriously?  Whether one shares the faith and views of Archduke Imre and Archduchess Kathleen (as she now is, since the current head of the House of Habsburg, himself married to a former minor baroness, does not insist on the maintenance of the traditional requirement for Habsburg spouses to be of royal blood) or not, any decent person who claims to care about royalty ought to be able to respect their convictions and wish them well in their new life together.

The newlyweds met two years ago at a mass at the same church (which just dedicated a shrine to Bl Karl this past Sunday) honoring the groom's saintly great-grandfather, and this weekend received an official Apostolic Blessing from Pope Benedict XVI (referring to the groom as "Archduke Imre of Austria," which can't have pleased the republican anti-title brigade).  What, for Catholics, could be more auspicious and appropriate?  I for one congratulate Archduke Imre and Archduchess Kathleen and am confident theirs will be a happy, fruitful, and enduring union that will prove all the naysayers wrong and offer hope to the beleaguered Western world, which has suffered so for nearly a century from the destruction of the Habsburg Empire and the values that underpinned it.

The Duke and Duchess of Cambridge begin their Diamond Jubilee Asian/Pacific tour, which will also include Malaysia, the Solomon Islands, and Tuvalu, with a visit to Singapore.  It is always exciting to see this young future King and Queen representing their country and doing their duty with aplomb.  No politician could be as glamourous or effective an ambassador.

Posted by Theodore Harvey at 2:26 PM No comments:

Thanks to my brother William Harvey, violin and viola teacher at the Afghanistan National Institute of Music, for calling my attention to this interesting New York Times discussion of The Staying Power of Arab Monarchies.  For a variety of reasons, the region's monarchies all appear likely to weather the "Arab Spring" unrest intact, while authoritarian republican regimes have fallen, with more potentially to follow.  What seems inescapable is the conclusion that within any particular cultural context, monarchies generally can offer their people more stability and hope than republics.
Posted by Theodore Harvey at 4:37 PM No comments: