Today was a great day for royalists and Anglicans in North Texas. For the first time ever, the American Region of the Society of King Charles the Martyr held its annual mass (commemorating the 30 January martyrdom of King Charles) in the Lone Star State, at St Vincent's Cathedral in Bedford. I had been looking forward to this event for well over a year, ever since learning it would be in my area. (Most US SKCM masses have been too far for me to attend, though I went in 2002 in New York when living there and in 2006 in Charleston when living in Charlotte, as well as to the Restoration celebration in May 2010 in Omaha.) I was not disappointed, though I wish more people had attended; my hopes of attracting out-of-state monarchist friends for a large gathering did not materialize. But for those who were there it was a wonderful morning.

The SKCM's Mark Wuonola and I are both fans of Viennese orchestral masses in their intended liturgical context, which whenever possible has been the custom at SKCM masses, and St Vincent's and its music director Barbara Burton proved happy to oblige with Mozart's Spatzen Messe ("Sparrow Mass"), K. 220. As an SKCM member I donated my services as cellist and recruited two of my Dallas Symphony colleagues to play violin. I arrived early for rehearsal and was pleased to see both the Society's large portrait of King Charles and the programs with my name on the back, the first time I had been associated as a cellist with any religious service honouring a King. 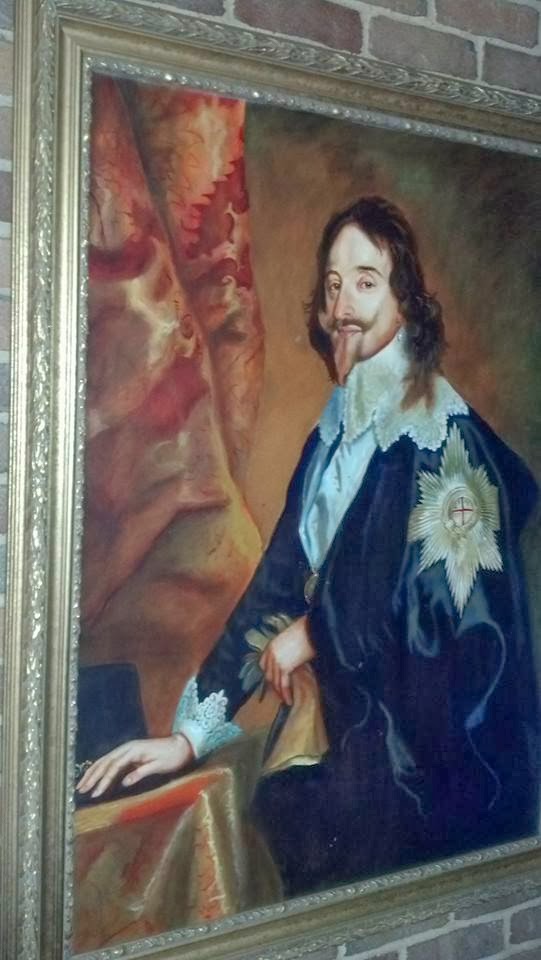 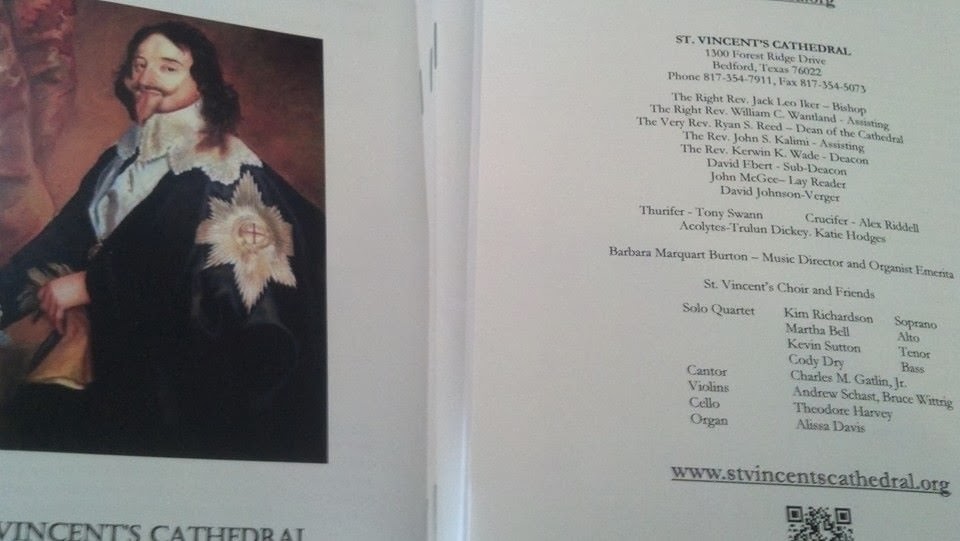 Before the other musicians had arrived, Dr Burton and I went through the Bach Air which I would play at the Offertory. Then with the full choir, soloists, and strings we rehearsed the Mozart mass. Everyone was well prepared and I had no doubt the music for the liturgy would go smoothly. I was excited for what was only my second time performing an orchestral mass liturgically. I greeted my friends and fellow royalists from Sherman, Fr. Reid Wightman and Michael Yost (son of today's preacher), until it was time to return to the organ loft where my symphony colleague Andrew Schast (whose wife had been music director at St Vincent's) and Dr. Burton beautifully performed Mozart's Adagio in E, K. 261 for the Prelude.


The mass began with the first of the Society hymns (familiar tunes with words specific to S. Charles) I had first heard in 2002 in New York: "Royal Charles, who chose to die Rather than the Faith deny." A grand procession including incense and three mitred bishops (William C. Wantland, SKCM Episcopal Patron Keith Ackerman, and celebrant Jack Iker, Bishop of Fort Worth, who had been the preacher in 2006 in Charleston) made its way up the aisle as we triumphantly sang. After the traditional Collect for Purity and the Summary of the Law we began the Kyrie of the Mozart, followed immediately by the Gloria. For an Anglican Monarchist Cellist, few experiences can compare to having had the honour to perform a Mozart mass liturgically for the annual national Mass of the Feast of King Charles the Martyr. Music like this, never intended for the concert hall, becomes something altogether more powerful and meaningful placed as intended in Christian Liturgy, each complementing and strengthening the other.

After the Gloria came the Collect: "O Lord we offer unto thee all praise and thanks for the glory of Thy grace that shined forth in Thine anointed servant Charles; and we beseech Thee to give us all grace, by a careful studious imitation of this Thy blessed Saint and Martyr, that we may be made worthy to receive benefit by his prayers, which he, in communion with the Church Catholic, offers up unto Thee for that part of it here Militant, through Thy Son, our Blessed Savior Jesus Christ."

The Epistle (1 Peter 2: 13-17) appropriately contained one of my favourite admonitions of the Bible: "Honour all men. Love the brotherhood. Fear God. Honour the king." Likewise the Gospel (Matthew 27: 15-26), dealing with Pilate's release of Barabbas, suggested the dangers of mob rule. Following the Gospel came one of the aspects I had most eagerly anticipated, the Sermon by my friend Fr. Martin Yost SSC, Rector of St Stephen's Episcopal Church in Sherman. I'm not going to try to summarize it as it really needs to be read in its entirety; it will be available eventually in the SKCM's newsletter and probably online as well. But Fr. Yost was as brilliant and eloquent as I could have hoped he would be.

After the Creed, the Prayers, and the Greetings the Offertory began as Dr. Burton and I played Bach's Air from the Orchestral Suite No. 3 in D BWV 1068. A special piece for me in that I also performed it at both of my grandmothers' funerals, it works for any occasion. This was followed by another Society hymn, happily in the same key, whose last two verses I think are worth quoting in their entirety.

A century before Great Charles was called to die,
A sinful king laid waste the Church -- Angered our God on high.
The fire of Heaven's wrath waxed hotly more and more;
Until thy Royal blood, O saint, cancelled the sin of yore.

And now before our God, in joyous grief we bend,
And pray that England's Throne and Church He ever will defend.
Jesus, be praise to thee, who reignest in the sky,
To Father and to Holy Ghost be praise eternally.

As I said in my 2010 lecture on Music and the Church, one of my favourite moments of any mass with a choral setting by a great composer is when the priest intones the Preface and its conclusion ("Therefore with Angels and Archangels, and with all the company of heaven, we laud and magnify thy glorious Name, evermore praising thee and saying,") is followed immediately by a stupendous Sanctus, as was the case today; Dr. Burton didn't miss a beat bringing the choir and orchestra in so that Mozart's glorious music upstairs in the back flowed organically from the solemn liturgy celebrated by Bishop Iker downstairs in the front. The consecration of the elements accomplished, the Agnus Dei, ending with a recapitulation of the material from the opening Kyrie, concluded my duties as cellist. The choir sang William Byrd's Ave Verum (I was glad that the music for the day included a piece by an English composer with whose music King Charles, though not of the same Church, may have been familiar) as the congregation including me received Communion. Since at the 2002 and 2006 SKCM masses I was not yet baptized, it meant a lot to me to finally be able to receive Communion at this mass. Two more Society hymns and final prayers concluded the liturgy.


Participating Clergy after the Mass

Afterwards most of us continued to St Vincent's Parish Hall for an elegant English luncheon consisting of Salad, Beef Wellington, Mushy Peas, Roasted Vegetables, Cornish Hen, Trifle, and Sticky Toffee Pudding.  I enjoyed meeting Bishop Iker; contrary to what his liberal detractors might assume, American Anglicanism's leading traditionalist is strikingly warm and friendly in person, as is Bishop Ackerman, who had me stand up to show the assembly my Society pin and tie. (I had also brought SKCM membership forms which were all taken.) Both bishops as well as St Vincent's Dean Reed were very appreciative of the music. The lovely afternoon concluded with the assembled monarchists (including Fr. Yost and his son), representing both the Anglican and Roman Catholic communions, posing for a picture with Bishop Ackerman (Bishop Iker had already left to look after his grandchildren).

All in all this was an unforgettable day well worth the months of anticipation and planning it took. I'm sure everyone who came was very glad they were there, and the event made me grateful to be an Anglican and proud to be a monarchist and musician. I'm sure that King Charles I rejoices to know that no matter how much time has passed since his reign and no matter how much the heirs of his Roundhead enemies scoff, there will always be those of us who remember him and that for which he died.