While I'm not interested in baseball per se, some of the commentary about the Chicago Cubs winning their first World Series since 1908 (how is it that a sport primarily played in the USA can have a "World Series"?) does interest me as it's an opportunity to reflect on all that has changed in the country and in the world since then, as some commentators indeed have.

While no one openly celebrates the many atrocities of unprecedented magnitude that have occurred during that historical interval, progressives (and not a few who call themselves "conservatives") otherwise seem to regard the profound differences between 1908 and 2016 as generally constituting an essentially uplifting narrative of improvement. As a monarchist, and more broadly a traditionalist, I cannot agree. While I acknowledge that it is not hard at a purely materialist level (which is not unimportant) to point out many ways in which life in 2016 is preferable to life in 1908, in every other sense--politically, culturally, socially, religiously, musically, architecturally, demographically--yes, I would prefer the Edwardian world of 1908 (not knowing what was to come 6-10 years later). So, without making any comment on the present U.S. presidential candidates, I cannot help but feel in the course of this campaign (mercifully soon to be over) that some liberals' shrill attacks on the very idea of nostalgia for an unspecified earlier time are implicit attacks on people like me too, even if monarchists are not numerous enough to be singled out. If that makes me "Deplorable," I guess I'm "Deplorable." 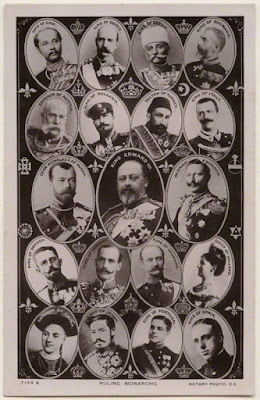