This weekend, with events both yesterday at the Meadows Museum and today at St. Michael and All Angels Episcopal Church, I had the great honour of meeting HRH the Duke of Gloucester, who was in Dallas for the Investiture of Knights and Dames and Other Grades of The Most Venerable Order of The Hospital of St John of Jerusalem. Several members of my own Church of the Incarnation including the Rector the Rt Rev Anthony Burton, as well as both the current and former rectors of Saint Thomas Church and many other distinguished individuals, were invested by the Duke. Beautiful music of Bach, Elgar, Charpentier, Parry, & Gabrieli was performed by the choir and orchestra which included a few of my Dallas Symphony colleagues. What a thrill to have a member of the British Royal Family in Dallas and get to meet him! I sang "God Save the Queen" and most of the other hymns with great gusto. A glorious afternoon I shall never forget. 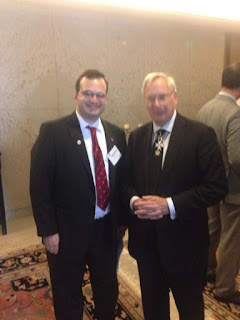 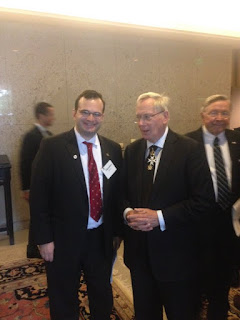 Posted by Theodore Harvey at 5:35 PM No comments:

Monarchy and the Unity Paradox

I've been longing for and advocating the restoration of fallen monarchies, especially in Europe, for nearly 25 years, more than any other political cause, and I'm only 37. I'll never give up. It's part of who I am to believe in the Return of the Kings. As my friend Charles Coulombe once said, the last monarchist will die when the last human being does. But I find it's getting harder to have much confidence that I will see Restoration actually happen anywhere. And a depressing thought that occurred to me recently is that even if by some miracle (and it does often seem like it would take a miracle) we monarchists were able to convince a majority of the population of a formerly monarchical country to back the restoration of the monarchy, we wouldn't convince everyone, and in all probability, since society would still be influenced by currents of modern thought derived from the French and Russian Revolutions, the opposition from those who are implacably hostile in principle to any hereditary public office would be so furious that it would be difficult or impossible for the newly restored Crown to fulfill one of its key functions, as a focus for national unity.

"Unity" is one of the most frequent arguments that defenders of constitutional monarchy make; I've made it myself. In theory, a hereditary monarch, who did not seek his office but serves because it is his duty, who does not owe his position to any particular partisan faction, who is not a product of anyone's ambition including his own, who no one voted against, is much better suited to serve as a focus for patriotism than an elected politician, inevitably the product of a divisive contest. Certainly monarchies even in modern times have served admirably as a focus for national unity (one thinks of the British and European monarchies during World War II), and still basically do in some countries (Denmark, Bhutan, Oman, and Thailand come to mind). But can we seriously argue that the Crown currently acts as a focus for national unity in Spain, Scotland, or Australia? In these countries and probably others as well, enough people (even if still a minority) are bitterly opposed to the very existence of the Crown that it's become one more divisive, controversial, political issue. That's probably one reason why despite claiming to be a Christian, and Christians aren't supposed to do this, I'm tempted to dehumanize abolitionist republicans: because the Crown's unifying function arguably only really works if virtually all of its subjects allow it to do so, or if those who vocally oppose it are not actually counted as people. I don't just disagree with British people who advocate the abolition of the Monarchy; I don't want them to exist at all, because they potentially ruin my concept of what the Crown is for the British people.

Don't get me wrong, I'm as passionately monarchist as ever; I personally love monarchies and I freely admit that I care more about myself and the people who agree with me than I do about those who don't, just as abolitionist republicans obviously don't care about the people in their country who would be deeply saddened, even devastated, by the loss of the Monarchy, or they wouldn't be abolitionist republicans. If that sounds shockingly selfish, I submit that there is no political controversy in which preference for the interests of one's own side, even (or especially) if outnumbered, is not present. But that's the problem: it wasn't supposed to be like this. The moment Monarchy itself (as opposed to the actions of a particular monarch, which have rarely gone entirely without opposition) becomes a "Controversy," it loses part of its essence. It can no longer quite be everything it is supposed to be. Those of us who love it can continue to do so as fervently as ever, but how much confidence can we have in the continuing reality of the traditional mystical sense that the Sovereign in a way is the Nation?
Posted by Theodore Harvey at 9:48 PM 2 comments: 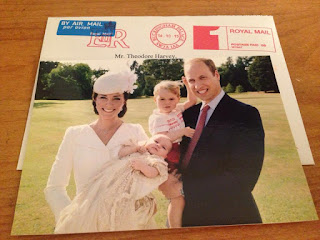 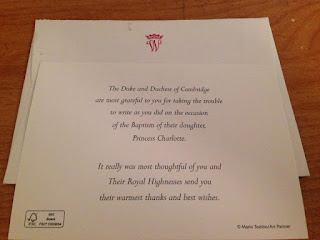 If I actually lived in Britain or Australia, I bet my Facebook page would be a war zone, and my Blocked list considerably longer than it is. My brother, who due to all his travels and musical projects knows many more non-American musicians than I do, tells me that all the young British or Australian classical musicians he's met are republicans. This breaks my heart, and is not acceptable, and I have no desire to be friends with people like that. I can't imagine having to regularly work with the sort of people who are lucky enough to live in a constitutional monarchy and don't appreciate it. What is wrong with them? How can they not love William & Kate and George and Charlotte? And after all Prince Charles has done for the arts? I just don't understand, and I never will. While there's something to be said for living in a country to whose constitution one can give one's wholehearted loyalty, I wonder if in my case it would really be worth the stress.
Posted by Theodore Harvey at 11:20 PM 2 comments:

RIP Prince Carlos of Bourbon-Two Sicilies, Infante of Spain, Duke of Calabria, who died today at 77. As the senior male line descendant of Kings Ferdinand I, Francesco I, and Ferdinand II, he was one of the two claimants to the throne of the Kingdom of the Two Sicilies for over fifty years. 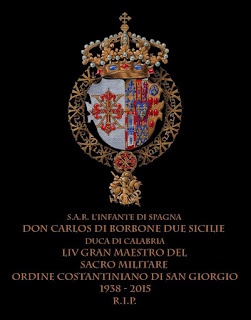 Posted by Theodore Harvey at 4:21 PM No comments:

Even the most diehard monarchists, like me, do not deny that there were serious problems in France in 1789 and in Russia in 1917, though we obviously deny that revolution was the right way to address them. But the Portuguese revolution of 5 October 1910, 105 years ago today, has got to be one of the most stupid, pointless, and unnecessary revolutions in history. With virtually no support outside the capital Lisbon, it really was pretty much "well there's no war or major economic crisis going on, but let's overthrow the constitutional Monarchy because Progress, and we're mad that twenty years ago Britain wouldn't let us connect our two African colonies and it totally makes sense to blame that on the King, and our new young King is insecure because we murdered his father and older brother two years ago, and we're bored, so why not?"

One hundred and five years of republicanism in Portugal is one hundred and five years too many. And no, right-wingers, Salazar was NOT an acceptable substitute for the King. On its lamentable anniversary--which ironically is also the much happier anniversary of the recognition of the Kingdom of Portugal in 1143--I condemn the Portuguese Republic as an illegitimate abomination and demand the restoration of the Monarchy. Viva o Rei!

Posted by Theodore Harvey at 12:13 PM No comments:

My mom came across this interesting comment online and sent it to me: