Yesterday was the 104th anniversary of the last Roman Catholic royal coronation (of King IV.Károly of Hungary, better known as Emperor Bl. Charles, in Budapest) to date. I find the fact that there have not been any such events more recently terribly sad. [Norway held the last Lutheran coronation in 1906, Romania the last Eastern Orthodox one in 1922, Ethiopia the last Oriental Orthodox one in 1930. The present Queen Elizabeth II, Supreme Governor of the Church of England, was crowned in 1953, as was the Wesleyan (Methodist) King of Tonga in 2015.]

Often I get so fed up with the way that most Christians (whether Protestant, Catholic, or Orthodox) today are not nearly as outraged as I am by the modern era's replacement of so many Christian monarchies with republics that with the exception of the pandemic that has touched us all I feel like I don't want to care about whatever it is that more "normal" Christian people (whether "progressive" or "conservative") today are supposed to care about. I suppose that might be considered selfish. The thing is, I want to be able to be a Christian while holding a worldview (supportive of things like monarchical government, hereditary titles, and formal class distinctions) that while once widely accepted by Christians (at least in Europe) no longer is, and I get frustrated that contemporary Christianity doesn't seem to want to let me be the type of Christian I want to be, by which I mean the sort of High Tory Anglican who loves the Monarchy, prays for his Queen (never a "President"), would have seen nothing wrong at the time with the British Empire (though in hindsight I regret that it left so many republics in its wake), and while broadly tolerant of most human traits and behaviours has very little tolerance for republicanism.
Conservative Catholics (especially ex-Anglicans) often caricature the Episcopal Church and [in the "first world"] the Anglican Communion these days as hopelessly "liberal," but in terms of the issues that matter most to me, the Roman Catholic Church of Pope Francis is no better. (Is there even one Catholic bishop anywhere who would publicly advocate the restoration of his country's monarchy? And don't tell me it's not doctrine; clergy routinely talk about all sorts of things that aren't doctrine.) At least as Episcopalians we're in communion with the most famous surviving Monarchy in the world. (I don't want to know what would happen to my relationship with Anglicanism if the unthinkable happened in Britain. Let's all please pray we never find out.)
I suppose the big historical question is, did the more hierarchical and liturgical Christian Churches (principally Catholic, Orthodox, Anglican, and Lutheran) once seem to endorse monarchical government and hierarchical society (radical Protestants and earlier heretics like the Hussites and Lollards never did) because that's what God wants, or simply as a pragmatic approach of dealing with The Way Things Were (but no longer Are)? I would give the former answer, but I suspect most Christians today (if they think about these things at all) would probably give the latter. But I for one will continue to pray not only for an end to the Coronavirus pandemic but also for a worldwide return to sanity and monarchical government, no matter what year it is. 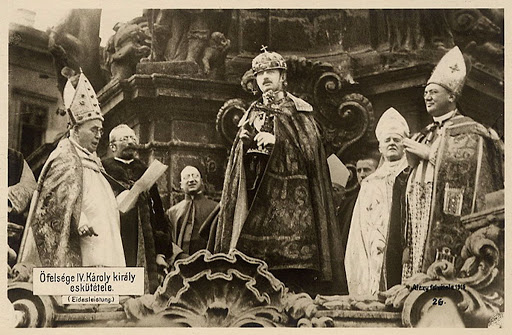