I am absolutely thrilled at the magnificent Brexit result from across the pond! While the way ahead will not be quick or easy, the United Kingdom can now once again be a fully independent country. So very proud of all my Vote Leave friends in the UK who worked so hard for this victory and wish I could celebrate with them. We have proved that the arrogant "experts" who care little for what real people love can be defeated. I never thought I would say this, but my respect for the democratic process and the British public has been restored. Rule Britannia and God Save the Queen!

In my adult lifetime there have been three major referendums in the English-speaking world, all of which I wished I could have voted in (though few if any people could have voted in all three): Australia 1999, Scotland 2014, and Britain 2016. Incredibly, all three have now gone the way I wanted, though tonight's is the most surprising as it was the only one of the three in which I backed the anti-status-quo side. Maybe I am not so alone in this world politically after all. Maybe one day elsewhere in the world we will even see a successful referendum to restore a fallen monarchy!
Posted by Theodore Harvey at 12:26 AM 7 comments:

I haven't been addressing tomorrow's EU referendum in the UK at this blog, but it's too important to ignore completely. It probably will not come as a surprise to any regular readers that I favour a Leave vote ("Brexit"). Below is a collection of recent Facebook posts of mine which I think collectively explain my position sufficiently. 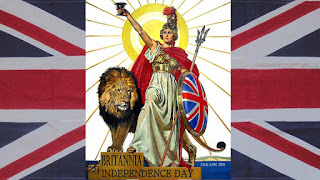 The EU vote on Thursday is not about specific outcomes of particular issues. It is not about immigration, or the NHS, or fishing, or environmentalism, or workplace regulations. Less still is it about any kind of nostalgia for the Empire, prone to that as I am. It is about one thing and one thing only: who will determine those outcomes in the future. If you are British and believe that Britain should be governed by its own government, please Vote Leave.

Nations that abolished their Monarchies are dead to me. Italy died in 1946, Germany and Austria died in 1918, Portugal died in 1910, France died several times a long time ago. The Continent has nothing constructive whatsoever to offer the United KINGDOM. Break free from the corpse!

All I want for Britain is for Princes Charles, William, and George to inherit the throne of a fully independent and sovereign country.

I've been against the EU for a long time, before it was fashionable. I wrote this way back in 2000, when the possibility of the UK abolishing the Pound and joining the Euro was still under discussion (thank God that didn't happen!), and when I was still a liberal on American politics. Some things in Britain and Europe have changed since then (usually for the worse), but I think other points are as relevant today as they were then.

Since the Remain camp's online arguments seem to rely heavily on "look at all the nice reasonable respectable people on our side/eww, look at the nasty extremists on theirs," I'm sure they're just delighted to have a fine upstanding citizen like Anjem Choudary on board. Two can play at that game.

Here (from a former advisor to Pope John Paul II) is a refreshing contrast to the pro-Remain blatherings of our pathetic Archbishop of Canterbury (as well as the Archbishop of Westminster). There is nothing Christian about the EU, which even now is preparing to admit Turkey with potentially disastrous consequences, and yes, Christians should back Brexit. Everyone should back Brexit.

Terrific reception for HM the Queen and HRH the Duke of Edinburgh in Liverpool today. While the EU referendum is a distinct issue from the Monarchy, and there are certainly Remainers who support the monarchy and (as I discovered on Twitter) republicans on the Leave side, I would be very surprised if most of Britain's most fervent royalists aren't voting Leave and most of the Crown's enemies aren't voting Remain. While I prefer to try not to read too much into recent reports, it seems likely that HM and HRH would, at the least, secretly not be displeased by a victory for Brexit.


Most monarchists, though we strongly support today's constitutional monarchies and would love to increase their number, accept that the days when European countries were directly ruled by hereditary "absolute" kings and queens unchecked by democratic elections are over. What is not acceptable, however, is for power to shift away from national governments to new undemocratic elites who are no more accountable than the old royal ones but without any of their history, grandeur, or charm. If the "ancien regime" rule of Kings must continue to be superseded by more "modern" systems, let it at least have been replaced with genuine national democracy and not a counterfeit headed towards the dissolution of nations into a single monstrosity.


The European Union is the worst of both worlds: an elite at least as self-serving, high-handed, and contemptuous of the concerns of ordinary people as French aristocrats of the 1780s were alleged to be and lacking any of the respect for "The People" that democrats claim to value (as we've seen in Greece), yet simultaneously alien to the traditional hierarchical and Christian culture of European nations, whose vestiges it may very well one day seek to abolish altogether. The EU is neither democratic nor monarchist, neither progressive nor traditionalist, neither truly socialist nor truly capitalist, but some kind of unholy hybrid of technocratic statism and neoliberal finance that benefits only its own officials. The referendum tomorrow is not a Left/Right issue, it is an Independence issue. As hard as it is may be for some of us to embrace some of our de facto allies, whether you are Labour or Tory, whether in the 1640s you would have fought for Oliver Cromwell or King Charles I, if you believe in Britain, please Vote Leave!
Posted by Theodore Harvey at 4:50 PM 4 comments:

All sorts of media are noticing the Brazilian monarchist movement, including now the Wall Street Journal. Like many of these articles it's somewhat irreverent, but at least the cause is being noticed. I was among those leaving a supportive comment on the new official Facebook page of Príncipe Dom Rafael do Brasil, though I can't argue in Portuguese.