Below are some assorted thoughts on Friday's Vatican decree, originally intended for Facebook. (16 July) This isn’t really my fight anymore. But if I were Catholic I’d be angry and defiant. I will always promote and defend the incomparable treasury of music, art, and architecture inspired by the Latin Mass.

(18 July) It was striking that at Incarnation this morning, two days after a certain cruel and malicious document emanated from the regime in Rome, that both choral works (Byrd Ego sum panis vitae & Gabrieli O sacrum convivium) were in Latin, written for the Roman Catholic Church when it was a serious institution with serious liturgy and music. I am so grateful to be an Episcopalian.

Eighty-five years ago yesterday, which happened to be the 18th anniversary of the murder of the Romanovs (a fact that I'm sure must have been noted by some at the time), after five years of republican chaos, right-wingers in Spain decided they'd had enough. "Traditionis Custodes" deserves no more respect or obedience than the Spanish Republic did. Before I make a point implicitly critical of some American traditionalists, let me be clear that there is absolutely no justification whatsoever for what the Vatican regime promulgated on Friday. I think it is one of the most evil papal (?) pronouncements in the entire history of the Roman Catholic Church. Many good Catholics who did nothing at all to deserve this will be negatively affected.

That said, I do think that the vocal identification of a noisy minority of American traditionalists, fierce critics (not without just cause) of the current occupant of the Vatican, with unqualified support of Donald Trump, egged on by Archbishop Vigano, may have contributed to the climate that made "Traditionis Custodes" possible. Again, this is not a defense of Bergoglio's act, which I condemn, in any way whatsoever. Most traditionalists are not Americans and many American traditionalists do not support Trump, but the shrillness and visibility of those who do seems to me to have contributed to a false and unjust association of the Latin Mass subculture in the United States with Trumpism. It may be that this ghastly decree still would have appeared even if Hillary Clinton had won in 2016 or if red hat MAGA Catholicism had never become a thing. I don't know. No one does. I just think that for Christians to put their trust in (and allow their faith to be identified with) any politician, especially an objectively terrible person like Donald Trump, is always a mistake. (I'm obviously a fervent monarchist, but I don't think I idolize any specific monarch, not even Queen Elizabeth II, quite to the extent that MAGAists idolize Trump.) I think it's long past time for all conservatives and traditionalists of any stripe to face the fact that the Trump presidency ultimately made everything worse, including from a genuinely traditionalist perspective. Americanism poisons everything, and MAGA is Americanism on steroids. The modernist Left and the Trumpist fake "Right" deserve each other. A plague on both their houses. The tragedy is that some Catholics who are in no way Trumpists and never fell for MAGA cultism are likely to lose access to the mass they love, unless they are able and willing to seek refuge in the SSPX, independent chapels, or sedevacantism, for which I wouldn't blame them at all. 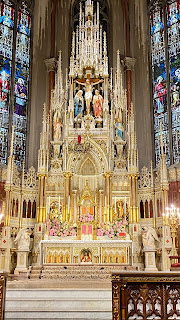