Congratulations to HM The Queen and HRH the Duke of Edinburgh on their 70th anniversary!

There's an irritating October 26 New York Times article by David Brooks, trying to make a tortured analogy between the Republicans of 2017 and the Bolsheviks of 1917, and it irritates me not only because David Brooks's main purpose in life seems to be being the sort of "conservative" that liberals find palatable. What's worse is that it arrogantly asserts that the "traditional" American way of being Christian--assuming that Democracy and Equality are moral imperatives--is the only way. Brooks implies that the "hierarchical societies" that dominated the world prior to the revolutions of 1776 and 1789 (and to a lesser extent until 1917)--that is, the great majority of Christian history, let alone world history--weren't really Christian, and that ancient thinkers such as Plato and Aristotle were deficient because they wouldn't have understood Jefferson's Declaration of Independence. It would make more sense to reject Christianity entirely than to believe that somehow no one really figured it out for its first 1750 years or so, but that appears to be what many Christians--including "conservatives"--believe these days. If "universal democracy" is "the global fulfillment of the providential plan," count me out. But perhaps Providence has ideas other than those of David Brooks.
Posted by Theodore Harvey at 11:48 PM No comments:

Today would have been the 100th birthday of the genealogically remarkable Infanta Alicia of Bourbon-Parma, Duchess of Calabria (1917-2017), had she not died in March. The last surviving royal born before the end of World War I (in Vienna where Emperor Karl still reigned), she was the heiress by cognatic primogeniture of the Kings of Navarre, Edward the Confessor of England, David I of Scotland, and of the Jacobite (Stuart) claim to the English and Scottish thrones if uncle-niece marriages were excluded. Since her son Carlos (1938-2015) predeceased her, her grandson Pedro Duke of Noto (b 1968), also a claimant to the throne of the Two Sicilies, is the current heir to those theoretical claims. While at 99 she was not exactly cut off in her prime, I was sorry she didn't make her 100th birthday as she came so close. (Only one person of European royal birth has ever reached 100: Infanta Maria Adelaide of Portugal (1912-2012).) Here is Infanta Alicia pictured with Queen Sofia of Spain.

She was succeeded as oldest living European royal by the comparatively obscure Duchess Woizlawa of Mecklenburg-Schwerin, Princess Reuss (b 17 Dec 1918). 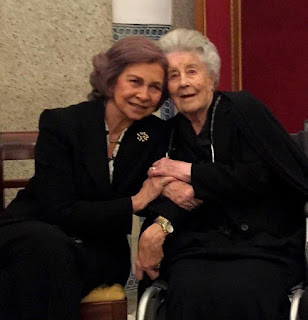 Posted by Theodore Harvey at 5:16 PM No comments:

On Friday during a wonderful trip to the Twin Cities, I had the pleasure of visiting the outstanding exhibit Eyewitness Views: Making History in 18th-Century Europe at the Minneapolis Institute of Art. Full of magnificent paintings of splendid occasions related to Spanish, Neapolitan, French, Austrian, Danish, and Saxon royalty, this is a must-see for American monarchists. Created for the Getty Museum in Los Angeles, it's in Minneapolis until the end of the year, after which it will be in Cleveland. Highly recommended if you're near or able to visit either of those cities.

I also visited the American Swedish Institute, where the Grand Hall of the 1908 Turnblad Mansion features portraits of King Oscar II (1829-1907) and King Gustaf III (1746-1792), and attended mass at the Church of St. Agnes where the Catholic culture of the Habsburg empire is alive and well with Viennese style orchestral masses on Sundays throughout the year, in this case Dvorak's Mass in D. It was great fun to meet up in person with a few Minnesota monarchist friends with whom I had previously communicated only via Facebook.

A paradox. On the one hand, for an American to be a self-proclaimed "Monarchist" is fairly unusual. Yet at the same time, the aesthetics of Monarchy are so obviously and universally appealing, it is not hard in the USA to find art exhibits that celebrate them. And if I were the only one who liked them, these exhibits wouldn't be viable. Here are the catalogue books for seven major exhibits on monarchical and aristocratic themes I've attended in recent years, all but the latest one in Texas. I'm anxious though that Monarchy not be confined in the popular imagination to the past, as it still has so much to offer the present and future. 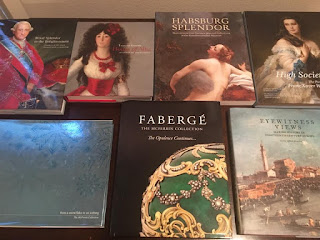 Posted by Theodore Harvey at 5:13 PM No comments:

One of the modernist concepts I most detest, which I'm convinced is intellectually lazy and meaningless, is "The People." For example, one reads that in Russia "The People" overthrew Tsar Nicholas II in 1917. No, they didn't. Nicholas II abdicated during street disorders (not the first of his reign) in Petrograd after being wrongly assured by those around him that this would be in Russia's best interests. No doubt some Russians were glad about this, but others certainly were not. There is no way of determining for sure what the majority view in 1917 Russia was, and even if there were, I vigorously deny that a majority can constitute "The People," since those who disagree with the majority are people too. In our time, even though I personally support Brexit, I would never dare claim that "The People" of the United Kingdom voted to Leave the EU. Clearly many British people did not. There is no such thing as "The People," only millions of individual people with many different convictions and opinions. Certainly I have never really felt part of any American "We The People." I'm just me. And you're just you. The majority don't speak for all individuals in a particular country. That's one reason I'd rather have a monarch, who makes no claim of being chosen by "The People."
Posted by Theodore Harvey at 3:56 PM No comments: