I am furious that the statue in Louisville of its martyred namesake King Louis XVI (1754-1793), who had nothing to do with American police brutality and in fact attempted to reform the French criminal justice system and tended to err on the side of leniency, has been vandalized. ⚜️


From Charles Coulombe: The attack on the Louis XVI statue in Louisville is ironic on several levels: Louis XVI wanted to buy out the slaveowners and liberate their slaves as early as 1777 - he thought he would be able to do so in ten years at the rate his reforms were working, but the next year made the biggest error of his reign: intervening in the American rebellion. Although that intervention made rebel victory possible (hence the statue and the town being named after him), it turned George III (who felt betrayed by Louis) against Catholic emancipation, and bankrupted France. Not only was there no money to free the slaves, there was none to feed the French peasantry when an Icelandic volcano spoiled the 1788 harvest - and so began the French Revolution. Moreover, the 1792 slave revolt in Haiti began as a rebellion in favour of the King against the newly installed republican government on the island. Toussaint l'Ouverture died in one of Napoleon's prisons both a devout Catholic and loyal to the Bourbons. Truly, life is a comedy for those who think, and a tragedy for those who feel. 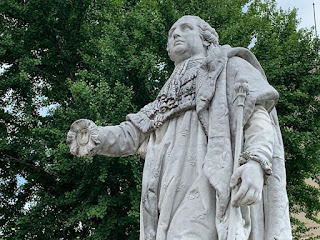 Posted by Theodore Harvey at 10:51 AM No comments: