The Queen has abdicated. Long live the King! 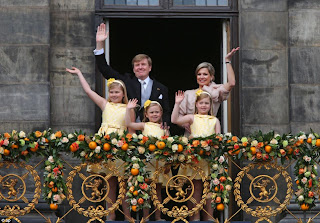 This blog salutes HRH Princess (formerly Queen) Beatrix for her 33 years of service to the Netherlands and congratulates King Willem-Alexander on his accession as the first King of the Netherlands in 123 years. (Here is my chart and map of Europe in 1890, the last time the Netherlands had a King: a very different world.) Lang leven de Koning!

As it turned out, while I missed the actual abdication, I am up to watch the inauguration at the link below. The Nieuwe Kerk looks glorious, virtually unrecognizable from when I was there last month and it was still dominated by "The American Indian" exhibit. The event may not be a coronation, but the new King looks suitably regal in ermine and Queen Maxima lovely in her tiara. An excerpt from the Bach Magnificat needed no translation. It is reassuring to see politicians obliged to swear allegiance to their new King. Thousands of Dutch have gathered in Dam Square to thank their former sovereign and celebrate their new one. Despite the inevitable grumblings of a few killjoy republicans, most Dutch people like their monarchy and see it as an integral part of Dutch identity.

The Amsterdam children's choir, accompanied by the Matangi Quartet (friends of a friend of mine), sang a song by Herman van Veen who performed with musicians of the Dallas Symphony (including yours truly) in Antwerp last month.

It's especially moving at the end of this video to see the former Queen leave the balcony and her three granddaughters come out to join their parents. For the first time since Crown Princess Victoria of Sweden turned 18 in 1995, Europe has a minor heir to a throne, reminding us that only Monarchy represents all generations; only Monarchy links the past to the future so beautifully. God bless Princess Catharina-Amalia (b 2003)!
Posted by Theodore Harvey at 7:43 AM 3 comments:

Having just returned from a trip (to Charlotte and New York) and already tired, I'm not sure I'm quite up to getting up by 3 AM tomorrow to watch the abdication of Queen Beatrix and accession of King Willem-Alexander live, though festivities will be continuing into the European night/North American afternoon. For those inclined to do so, however, the Dutch royal YouTube channel will stream the events live. Unfortunately I do not believe there will be any live coverage on US TV. I am sure many wonderful pictures and videos will be available for viewing later in the day as the people of the Kingdom of the  Netherlands celebrate Queen Beatrix's 33 years of service and their first King in 123 years.
Posted by Theodore Harvey at 9:46 PM 1 comment:

Why does everyone assume that Prince Charles is anxious for his mother to abdicate? He has been the most outspoken and creative Prince of Wales in history and some of what he does and says as Prince he could not do and say as King. The British Monarchy is not the Dutch Monarchy and abdication is not customary in Britain. Nevertheless, splendid pictures and video in this Mail article on Queen Beatrix's last dinner as Queen in the Rijksmuseum (which I just visited last month) on the eve of her abdication, with royal guests from all over the world.
Posted by Theodore Harvey at 9:40 PM No comments:

In what looks like a must-see for royalists, the new film Royal Paintbox explores the artistic legacy of the British royal family, many of whom (such as the present Prince of Wales) have been accomplished amateur artists in their own right.

Posted by Theodore Harvey at 6:25 PM No comments:

I recently finished watching Isabel, a superb and addictive new drama of the life of Spain's great Queen Isabella (1451-1504) (Michelle Jenner), the first season of which covers her life from adolescence until her accession as Queen of Castile in 1474, focusing on her struggles with her essentially well-meaning but indecisive and uninspiring half-brother Enrique IV (1425-1474) (brilliantly portrayed by Pablo Derqui). The entire cast deliver outstanding performances that completely transport the viewer into the 15th century, and no monarchist will fail to be moved either by Isabel's steely determination and passion for justice or by the stalwart devotion of those who are loyal to her. While I thought it was unfortunate to lose the fact that Ferdinand (Rodolfo Sanchez, eleven years older than Jenner) was actually younger than his wife, and some crowd scenes are not entirely convincing, these are minor quibbles, and I can't wait for Season 2! The series (official site) is available for free with English subtitles in North America on Drama Fever.
Posted by Theodore Harvey at 1:42 PM No comments:

I'm sorry this blog has been quiet lately. I spent most of March on tour in Europe with the Dallas Symphony, a triumphant and unforgettable musical experience that also left time for some monarchical sightseeing and socializing. In London before the tour started, I attended multiple choral church services and met up with some of my British royalist friends including two leaders of the British Monarchist Society. In Amsterdam, the only disappointment was that contrary to expectations, HM Queen Beatrix (who our Dutch music director Jaap van Zweden knows fairly well) did not in fact come to our concert at the Concertgebouw, so I did not get to meet her as I had hoped. I did however enjoy touring the Royal Palace, where the new King and Queen will appear on the balcony after their inauguration on April 30. I also had dinner with a Dutch member of my monarchist forum. I have always found it a pleasure to be able to put a face to a screen name, and this was no exception.

The most meaningful and moving landmark I visited was the Hofburg in Vienna, including the imperial treasury (featuring the regalia of the Holy Roman Empire including the great crown made for Otto the Great in 962), the imperial apartments of Franz Joseph and Elisabeth, and the Capuchin crypt where Habsburgs have been buried for the past four centuries. My generous and helpful guides in Vienna were Austrian monarchist Alexander Simec and his wife Gertrud of the Schwarz-Gelbe Allianz. I had very little free time in Munich, once the capital of the Kingdom of Bavaria, but enjoyed exploring Hamburg including the nineteenth-century Rathaus with its facade of Holy Roman Emperors (since as a Free City Hamburg owed allegiance only to the Emperor). In Frankfurt I had dinner with a German monarchist friend before our concert at the Alte Oper, which had been opened by Emperor Wilhelm I in 1880. My trip ended in the Kingdom of Belgium, where a much smaller orchestra performed two private concerts on the estate of a fairytale castle. As strange as it may be most of the time for a monarchist to live in Dallas, I am fortunate to be in a profession which occasionally provides ample opportunities for activities related to my interests and beliefs.

(with Alexander Simec at the statue of Emperor Franz II/I at the Hofburg in Vienna on 16 March)
Posted by Theodore Harvey at 5:03 PM 1 comment: