Ten years to the date after my first trip to the United Kingdom for the Golden Jubilee, I'm off to London tonight on my sixth, to celebrate Her Majesty's Diamond Jubilee!!!  Apart from the Jubilee events themselves, which promise to be unforgettable, I'm also looking forward to meeting fellow monarchists hitherto known only online, and of course, spending two and a half weeks in my favourite country.  God Save the Queen!
Posted by Theodore Harvey at 9:30 AM No comments:

The New York Times reports on an upcoming (June 6-8) conference at Kensington Palace, The Making of a Monarchy for the Modern World.  One of the speakers is Maya Jasanoff, with whom I had a brief cordial exchange when she was a guest of the local NPR station in Dallas to promote her excellent book Liberty's Exiles.  The event looks fascinating, and I will be attending!

Today is my last full day in the United States before leaving for London for the Diamond Jubilee, which should be a unique and unforgettable experience.  St Paul's Cathedral have released the Order of Service for the National Service of Thanksgiving to be celebrated there a week from today.  Following the conclusion of the Jubilee Weekend, I look forward to participating in the Executed Queens Tour of various Tudor and Stuart locations in southern England led by my friend royalist historian Gareth Russell.

On the occasion of the 352nd anniversary of the Restoration of the British Monarchy, and in hope that the monarchist cause may spread like beacons of fire throughout the world, here is one of the greatest scenes from The Lord of the Rings: The Return of the King, a perfect marriage of stunning cinematography and thrilling music.

Posted by Theodore Harvey at 9:40 AM No comments:

Once the world's only Hindu kingdom, Nepal has now lingered in republican darkness for four years. Its fall was the worst event I have had to report since beginning this blog.  It's bad enough that so many monarchies were abolished before I was born (or in the case of Iran, when I was six months old), but for this to happen during my adult lifetime when I grew up accustomed to including in the ranks of the world's surviving monarchies is intolerable.  I condemn the illegitimate and illegal Republic of Nepal on its fourth anniversary, which is four anniversaries too many.  Where is the Hindu equivalent of Francisco Franco to rise up and destroy this abomination?  Long live King Gyanendra, or if he and his son Paras have too much "baggage," long live his 9-year-old grandson King Hridayendra!  (HRH presumably doesn't look quite like this anymore, but I haven't seen a recent picture.)  As the Republic stumbles from one crisis to another, royalists must not give up on the Monarchy of Nepal!
Posted by Theodore Harvey at 10:34 AM No comments:

Royalty of the World at Windsor 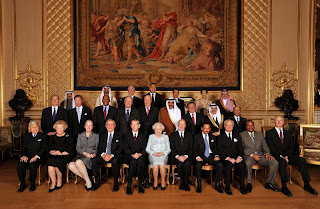 
Apparently that April 22 Telegraph article was much ado about nothing, as the former King of the Hellenes attended the Queen's Diamond Jubilee lunch after all, with no earth-shattering consequences, whatever Greek republicans say, resulting in a wonderful unique photograph (perhaps the most comprehensive ever taken) of most of the world's reigning monarchs.  Other members of the British royal family including the Duke & Duchess of Cambridge joined the Queen in welcoming this illustrious international assembly of royalty to Windsor Castle.  The absence of Queen Sofia and any representative of the royal families of Cambodia, Bhutan, and Oman is to be regretted, though monarchists can rejoice to see not only King Constantine but also the former kings of Romania and Bulgaria and the crown prince of Yugoslavia included.  Discussion however has been dominated by the presence of the controversial Kings of Bahrain and Swaziland, though I doubt most British people really mind nearly as much as noisy troublemakers apparently think they should.  Once again I say the Queen can invite who she likes; it's not as if democratic republican governments never host controversial republican heads of state!

Posted by Theodore Harvey at 10:05 AM No comments:

Outrageously, advance coverage of what should be a glittering glamorous gathering of royalty at Windsor tomorrow is being dominated by partisan political posturing.  Despite earlier reports that Spain's Queen Sofia would attend Queen Elizabeth II's Diamond Jubilee luncheon for international crowned heads, the Spanish government abruptly announced that she will not be going after all.  Misleading headlines suggested that this constituted a "snub" by Queen Sofia, but of course as the "Young Fogey" explains the rude decision was made by the Spanish Government, which reportedly "ordered" the Queen not to attend.  Nearly three hundred years after the Treaty of Utrecht, Spain is still perpetually and officially aggrieved by British possession of Gibraltar, whose inhabitants overwhelmingly wish to remain British, though a Spanish friend of mine believes the government's refusal to allow Queen Sofia (who surely would love to go if it were up to her) to travel to England tomorrow has more to do with finances than Gibraltar.  Either way, I am disgusted that mere politicians are able to prevent their Queen (herself a great-great-granddaughter of Queen Victoria) from attending a totally innocuous international family occasion celebrating the reign of her third cousin.  The Queen should be ordering them around, not the other way around!

As if that weren't bad enough, Queen Sofia's brother King Constantine II of Greece will not be attending either, to avoid offending the Greek government.  (As more than one wag on Facebook has commented, "what Greek government"?)  Unbelievably, Conservative [sic] Party chairman [sic] Baroness [sic] Warsi, trying to deflect criticism of the inclusion of the King of Bahrain, tried to claim that the guest list was the Queen's personal choice, flatly contradicted by reports from courtiers that if it were up to the Queen, of course King Constantine (her husband's first cousin once removed, and her grandson's godfather) would be attending.  I am sick of republican and crypto-republican politicians who think they have the right to boss royalty around and prevent them from attending functions whose sole purpose is to promote international understanding and good will.  I say to hell with the Greek government and to hell with the Spanish government!  Queen Sofia and King Constantine should go anyway, though of course they are far too polite to do so.  But I wish someone would tell these politicians exactly what they can do with their interference.
Posted by Theodore Harvey at 3:52 PM No comments:

International Royalty to Gather for Jubilee 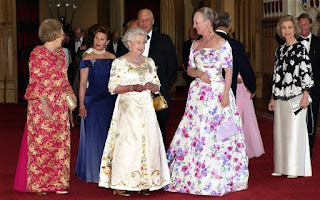 As Queen Elizabeth II prepares to host many of Europe and the world's leading royalty (as she did ten years ago as shown in the above picture) at Windsor to celebrate her Diamond Jubilee this Friday, Harry Mount reflects on "the world's most exclusive club." It's not a bad article, but I don't understand why even pro-monarchy commentators feel the need to include back-handed compliments like this: "Looked at objectively, monarchy is a ludicrous anachronism." No, no, no, a thousand times no! I do not concede this! While there's nothing necessarily wrong with "anachronism," there are plenty of rational and contemporary justifications for constitutional monarchy.  It is not all about glittering royal events, though this promises to be a splendid one, with guests including the Emperor of Japan.
Posted by Theodore Harvey at 4:44 PM 2 comments:

The Queen and the Orphan

In December 2010, in what proved to be one of my most popular blog posts, I wrote that "children are natural monarchists."  Here's one of them.
Posted by Theodore Harvey at 7:17 PM No comments:

Prince Charles on Liturgy...and the Weather

Recently the Prince of Wales opened the exhibition "Royal Devotion: Monarchy and the Book of Common Prayer" at the Lambeth Palace Library. In his speech the heir to the throne, who has long been known as a defender of the Church of England's traditional liturgy and is the Patron of the Prayer Book Society, eloquently defended the use of the classic language of the 1662 Book of Common Prayer, rejecting the notion that it is not sufficiently "accessible" to modern Christians.


"As somebody who was brought up on that prayer book - day after day, year after year, Sunday after Sunday, school worship after school worship, evening prayer, communion, everything - those words do sink into your soul in some extraordinary way," he told a group at Lambeth Palace.
"One of the things I have never understood is why there is such an anxiety about accessibility when in fact, if we think about it, we all get older and we are not all 18 or 16 forever.
"Even though you may not understand those words at that age, it is only when you get a bit older and you have lived through life and had all sorts of experiences and you have suffered, and you have survived perhaps, that you then realise just how valuable those forms of words are, just how valuable the sense of the sacred is in our lives.
"And how, when you are up against it, and you have terrible moments to endure or overcome, whether it is being in war or faced with some appalling difficulty, or even facing death, then those words, those wonderful words, come back to you, if you have been lucky enough to have absorbed them over your lifetime.
"So I do think that sense of the beauty of holiness is something of enormous importance."


If only more contemporary Anglican clergy demonstrated such an understanding of the importance and value of tradition!  HRH will make an excellent Supreme Governor of the Church someday.

On a lighter note, about a week later the Prince surprised BBC Scotland viewers by reading the weather forecast, which he did with great aplomb and humour:

Posted by Theodore Harvey at 9:22 AM No comments:

Count Carl Johan Bernadotte (born HRH Prince Carl Johan of Sweden), died yesterday at the age of 95.  The youngest child of King Gustaf VI Adolf of Sweden (1882-1973) and Princess Margaret of Great Britain (1882-1920), he was the uncle of both King Carl XVI Gustaf and Queen Margrethe II of Denmark, and the last surviving great-grandchild of Queen Victoria.  With his death a generation of royalty that began in 1879 with the birth of Princess Feodora of Saxe-Meiningen and included Kings Edward VIII and George VI of Great Britain, Olav V of Norway, George II, Alexander I, & Paul I of Greece, Carol II of Romania, and the ill-fated children of Nicholas II & Alexandra of Russia is finally gone.  The former Prince Carl Johan lost his royal titles with his marriage to a commoner in 1946, but unlike his brother Sigvard (1907-2002) apparently never minded, even though only a generation later the Swedish royal family relaxed its rules to allow his brother Bertil (1912-1997) and nephew (the present King) to marry commoners without loss of status.  Requiescat in pace.
Posted by Theodore Harvey at 11:01 PM No comments: 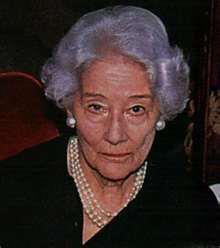 Emmanuelle de Dampierre, Duchess of Segovia, died Thursday in Rome (the city in which she had been born on November 8, 1913) at the age of 98.  Married in 1935 (divorced 1947) to Infante Jaime (1908-1975), second son of King Alfonso XIII of Spain, she sadly outlived both of their children, Don Alfonso (1936-1989) and Don Gonzalo (1937-2000) de Bourbon, as well as Alfonso's elder son Francisco (1972-1984).  Prior to the births of her great-grandchildren in 2007 and 2010, her sole surviving descendant was her grandson Luis Alfonso, Duke of Anjou (b 1974), who is regarded by those French royalists ("Legitimists") who do not accept the validity of the 1713 Treaty of Utrecht (according to which Felipe V of Spain renounced for himself and his descendants any claim to the French throne) as the de jure King Louis XX of France since the death of his father in a skiing accident in Colorado in 1989.  Now after a long life she has joined her sons and grandson.  Requiescat in pace.
Posted by Theodore Harvey at 3:35 PM No comments: