The Dutch royal family expressed their shock and horror after a car apparently aiming for the royal bus crashed into the crowd celebrating Queen's Day, killing several people and injuring more. Dutch police charged the driver with attempting to attack the royal family.

UPDATE (May 1): The driver of the car has died of his injuries.
Posted by Theodore Harvey at 12:38 PM 1 comment:

Prompted by rumors of an imminent abdication in the Netherlands, The Independent ponders the future of European monarchy.
Posted by Theodore Harvey at 11:37 AM No comments:

My April 23 was about as English as it could have been without actually being in England. I spent less than twenty-four hours in New York City, but packed in what seemed like more than a day's worth of activities, most with royal and Anglican connections. 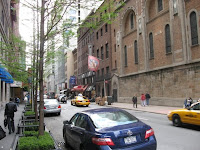 First stop was the Henry VIII exhibition "Vivat Rex" at the Grolier Club (about which I'd blogged two months earlier). A single room, though not particularly large, held an astonishing collection of artifacts from his reign, mostly books and documents, that was thrilling to behold. I doubt anything like this had ever been assembled in the United States before. My personal favorite was probably the 1502 Latin textbook in which the eleven-year-old Henry had written “Thys Boke Is Myne Prynce Henry," in a precociously authoritative penmanship whose tone leapt off the page five centuries later and would clearly brook no opposition. Other highlights included a Gospel that had been made for the coronation of Holy Roman Emperor Otto III in 983 and presented to Henry by a grateful Pope Leo X in thanks for his defense of Catholicism against Luther (also displayed, with Luther's response, and Bishop John Fisher's response to Luther's response), ironic in light of later events, and a letter from Catherine of Aragon to her nephew Emperor Charles V complaining about the King. One got a thorough view of Henry's involvement in every aspect of 16th-century English life, via the very documents he and his contemporaries had held and signed. There was much more than I can possibly describe and it was all a bit overwhelming to try to process in the hour I spent there; I highly recommend this exhibit to any readers able to make it there before it ends on May 2.

From the Grolier Club it was not far to the splendid Saint Thomas Church Fifth Avenue, where for the first time I attended a weekday Choral Evensong--the full choir's first since Easter, which exhibited the meditative dignity and musical excellence I'd come to expect via the webcasts but was even more satisfying to experience in person.

Afterwards I hurried over to Inside Park restaurant to meet two members of my monarchist forum, Aaron Traas and "Ethiomonarchist," for dinner. The three of us enjoyed a delicious meal and the rare chance to discuss a wide variety of monarchical topics the old-fashioned way. We couldn't linger too long, though, as soon it was time to head next door to St Bartholomew's Church for the Canterbury Cathedral choir concert. Having just recently been to Houston to hear the choir of St John's College Cambridge, this was only my second chance to hear an English choir of men and boys in concert, and their performance was a rare treat indeed. The lavish program booklet included a message from Development Appeal Patron HRH the Duke of Kent. While everything on the program (which included music of Byrd, Parsons, Tallis, Philips, the aforementioned Emperor Charles V's chief musician Nicolas Gombert, Scarlatti, Glinka, and Fauré, as well as some more recent composers whose works fully deserved to stand beside those of the older masters) was delightful, a special highlight for the (at least) three monarchists in the audience was Handel's glorious anthem for the 1727 coronation of King George II, "Zadok the Priest." Afterwards a church docent kindly took this picture of the three of us: 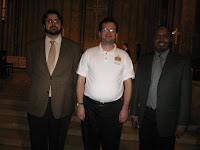 The English choral tradition is a priceless treasure, which along with the monarchy constitutes what I love most about that wonderful country, and it was a great joy to experience such a fine representation of it, especially when combined with the opportunity to meet fellow monarchists in real life, something I hope to repeat more often in the future.

After the concert I visited and stayed the night with my brother William, with whom I had a wonderfully decadent breakfast at Norma's this morning before returning to Dallas. I don't intend to make a habit of airplane trips this short, but this one was definitely worth it. For England and Saint George!

Parade magazine introduces its readers to contemporary royalty, focusing (in a charming interview) on TRH Crown Prince Frederik and Crown Princess Mary of Denmark and concluding, albeit sort of halfheartedly by this blog's standards, that countries with monarchies should probably keep them, even if they are "outdated." Supplements include a quiz (I got 20/20) and a photo gallery of British, Jordanian, and Monégasque royalty.
Posted by Theodore Harvey at 5:10 PM 1 comment:

Tonight, in a glorious and moving Easter Vigil at the Church of the Incarnation in Dallas, I was baptized into the Christian faith by the Rector, Bishop Anthony Burton, and confirmed as an Anglican by the Bishop Suffragan of Dallas, Paul Lambert. I am happy to be officially counted among the world's 77 million Anglicans and two billion Christians.

In addition to my friends at Incarnation, especially my wonderful sponsors Jason and Monica Awbrey and Bishop Burton, I would like to acknowledge two particular influences on my decision to embrace Anglican Christianity: the webcasts of New York's Saint Thomas Church, and the writings of Peter Hitchens. It's also worth noting that my father Jay Harvey was brought up in the Episcopal Church, his own father Richard W. Harvey (1911-1974) having been assistant organist at St. Thomas (1944-46) and subsequently organist at St. Paul's Episcopal Church in Flint, Michigan. So in a sense I have come home.

Here I am afterwards with my sponsors and the bishops (also above, though for some reason the blog version is cutting out Jason) and here with Curate Fr. Matthew Olver.
Posted by Theodore Harvey at 11:36 PM 6 comments:

Not even the world's only grand duchy is safe from the agenda of modernization, reports the New York Times.
Posted by Theodore Harvey at 3:44 PM 4 comments:

Nepalese monarchists, quite properly, have not given up hope of restoration. Blogger Maila Baje speculates on possible plans to restore King Gyanendra's six-year-old grandson Hridayendra to the throne. Sounds good to me. The republic must be regarded as temporary!

Hridayendra would of course not hold the real power even in the event of a restoration...but I'd rather be ruled by a six-year-old boy than by Maoists!
Posted by Theodore Harvey at 10:02 AM 4 comments:

Princess Eugenie, for some reason wearing a Stars & Stripes bikini, certainly appeared to enjoy herself while on vacation. Those who criticise her behaviour or her appearance need to get a life; I think she looks great.
Posted by Theodore Harvey at 8:47 AM No comments:

A newly discovered prayer roll reveals the young Henry VIII as a firm believer in aspects of the Roman Catholic faith the Reformation he unleashed would later oppose. One wonders though why this is treated as "news"; Henry VIII has been known for centuries to have been fervently religious; hence his "Defense of the Seven Sacraments" for which he was awarded the title "Defender of the Faith."
Posted by Theodore Harvey at 10:19 PM 2 comments:

Obamas and the Queen

Visiting the United Kingdom for the first time as president, Barack Obama noted that “[t]here’s one last thing I should mention I love about Great Britain and that is the Queen. I’m very much looking forward to meeting her.” The Obamas subsequently enjoyed a cordial meeting with the Queen and the Duke of Edinburgh. If Mrs. Obama displayed more physical familiarity than customary, Her Majesty did not seem to mind.
Posted by Theodore Harvey at 12:53 PM No comments: