So much for the Bourbon-Orléans family being hopelessly liberal (as sometimes claimed by anti-Utrecht Legitimists). Henri "VII" has responded to the Hollande regime's "integration" report advocating that Arabic be taught in French schools and that immigrants not be expected to assimilate into French culture. Has Louis "XX" ever spoken out with such courage and clarity? More importantly, has any mainstream French politician? Vive le Roi Henri VII!
Posted by Theodore Harvey at 5:27 PM No comments:

In two installments over the past two nights I finally watched this fine film (fortunately available with English subtitles in its entirety on YouTube) I'd been wanting to see for awhile, about one of France's greatest kings, Henry of Navarre (2010). Towards the end the king's genial interactions with his loyal and grateful subjects--who do indeed have chickens in their pots--are deeply moving, especially if one knows what's coming next. Only complaint: Henri's brother-in-law Charles IX (1550-1574) only lived to be 23, so it was bizarre to cast as him an actor who was 51 in 2010. (Why do historical movies so often do things like that?) Nevertheless, highly recommended should you have two and half hours to spare.

Posted by Theodore Harvey at 10:18 AM No comments:

I have mixed feelings about royalty seeking elective office, but this is a thoughtful endorsement of the younger of the two Afghan princes I met in August. If Afghanistan has to have a president, she could not do better than Nadir Naim. 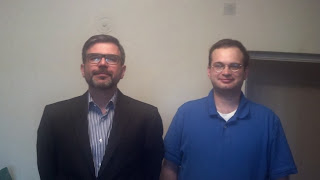 Posted by Theodore Harvey at 11:16 AM No comments:

This is the most heartbreaking list on Wikipedia, but a useful one in that it reminds us just how marginal republicanism was (in spite of the American, French, and Latin American revolutions) until the second decade of the 20th century. I think most monarchists, including myself, would be willing to accept as permanent the republics established before 1870, with the possible additions of Iceland (which had a medieval quasi-republican tradition), Finland, and the Baltics (though it would be lovely to see the Royal House of Lithuania given a chance). But the other newer republics beginning with the French are abominations.
Posted by Theodore Harvey at 3:19 PM 2 comments:

Unlike some monarchists, I have long argued that Vladimir Putin is no friend of Russian monarchism, a conclusion that this interesting July article seems to support.
Posted by Theodore Harvey at 2:38 PM No comments:

After 46 years of exile, King Constantine II and Queen Anne-Marie have returned to live in Greece. A positive development, to be sure, but if only they were returning to reign as King and Queen once more! One of my monarchist contacts however speculates that while this is unlikely for Constantine himself, perhaps his return could lay the groundwork for a possible return to public life of future generations.

On a side note, it's interesting how leftists who in any other context would claim to be strongly opposed to any sort of racial bigotry never cease to harp on the Danish/German ancestry of the Greek royal family, who have identified with Greece since 1863 (or the German ancestry--now rapidly diminishing with each generation, Prince George being only about 3/16 German--of the British royal family).
Posted by Theodore Harvey at 5:19 PM No comments:

Today is the 150th anniversary of the birth of Ralph Adams Cram (1863-1942), architect (with Bertram Goodhue) of my favorite church in the United States, Saint Thomas Fifth Avenue, and many other great ecclesiastical and collegiate buildings, mostly in the Gothic style of whose revival he was a great champion. I spent the weekend in the Boston area celebrating his legacy (an event organized by his firm) with a group that included several of his descendants. Cram buildings visited included Boston University's Marsh Chapel, Ruggles Baptist Church, the Church of the Advent (of which the Lady Chapel is his work), his private chapel (my own photo of which from Saturday appears below) in Sudbury near St Elizabeth's Episcopal Church (both named for the medieval Hungarian royal saint), the Society of St John the Evangelist, and All Saints Ashmont, his first church, where we attended a service of Lessons & Carols sung by the parish's choir of men and boys.

Other attendees included fellow monarchists Matthew Alderman (who I somewhat randomly met in Rome in February 2004 but hadn't seen since) and Charles A. Coulombe (who I've known online since 1999 but hadn't seen since our first meeting in Los Angeles in August 2006). Not nearly as well known as his monumental architectural achievements is that Cram, an Anglo-Catholic and medievalist, was correspondingly a Monarchist of sorts, authoring this intriguing "Invitation to Monarchy" for The American Mercury in 1936. 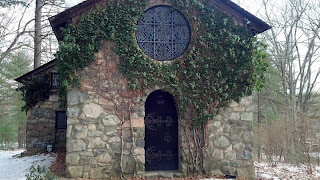 Posted by Theodore Harvey at 1:00 PM No comments:

HM King Bhumibol Adulyadej of Thailand, the world's longest-serving head of state (shown here with #2), urged Thais to work together for stability in a speech marking his 86th birthday. 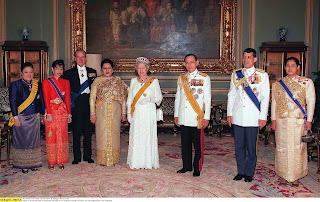 Posted by Theodore Harvey at 12:24 PM No comments:

Monarchy and Quality of Life

An interesting (if snide in parts) article from July brought to my attention today admits (unsurprisingly to experienced monarchists) that overall, monarchies outdo republics in statistics pertaining to quality of life. This is one reason why most people who live in constitutional monarchies are happy with them, even if they're not the sort of people who would write a monarchist blog. If only such facts could help persuade more residents of countries that once had monarchies of their own but sadly no longer do to restore them! In anticipation of a possible republican argument, it might be pointed out that some republics such as Switzerland, Finland, and Iceland also enjoy a superior quality of life. I would maintain that this does not actually strengthen abolitionist republicans' case, because these countries never had a monarchy of their own that had to be abolished in order to create their republic. If one makes the fairer comparison of European countries that have kept or restored their monarchies versus European countries that have abolished them (usually in violent revolutions), excluding republics that were founded as republics (a scenario obviously unavailable to current monarchies), the superiority of monarchies is even clearer. Even if it could be proved that the material advantages enjoyed by most residents of today's constitutional monarchies could be maintained without them (and of course I don't think so), it is quite clear from modern history that the inherently divisive and debilitating trauma of abolishing monarchies is detrimental to a nation's stability and contentment.

Speaking of differences between monarchies and republics, I think that someone able to cite more specifics than I am able to produce should write what could be a very interesting article on two quite distinct but oddly similar phenomena that as far as I know have never been compared to each other or discussed in the same piece.

It is occasionally observed in discussions about contemporary Christianity, particularly Protestantism, that while exceptions in both directions abound, generally churches that maintain a relatively traditional liturgical worship style with an emphasis on classical sacred music and caring for their historic buildings tend to be fairly liberal politically and theologically, while many theologically and politically conservative churches embrace a contemporary style with praise bands and austere modern architecture. (I believe this is somewhat less true in Catholicism, where advocates of Latin and Gregorian chant are likely to also vigorously uphold doctrinal orthodoxy, though the aesthetically modernist/theologically conservative combination certainly exists.) Various explanations for what might seem to an outsider like a curious state of affairs (why do comprehensive traditionalists and comprehensive modernists seem to be relatively rare?) exist, but if the generalization is valid it remains somewhat mysterious.

Could a similar pattern be observed when comparing European countries that have kept their monarchies to those that have not? Obviously, broadly speaking, keeping a monarchy is a conservative thing to do and getting rid of it a radical one. But when it comes to certain divisive issues (mostly related to sexuality) that have arisen relatively recently (issues this blog normally avoids with good reason!), as well as some older economic questions, it often seems like the Eastern European republics, almost all of which fell to Communism but shook it off near the end of the 20th century, are now more "right-wing" (see previous post) than the Western European constitutional monarchies, without (alas!) much if any momentum towards royal restoration (Serbia possibly excepted). Even in Western Europe, while this may be changing, the republics of Ireland, Portugal, and Malta have been generally more socially conservative than the constitutional monarchies. An openly homosexual person (even if republican in principle) would probably be much happier in the kingdoms of the Netherlands or Sweden than in the republics of Poland or Russia, and a socially conservative Catholic or Orthodox Christian (even if monarchist in principle) would probably be more comfortable in the East.

Are these two ironies, if indeed they are ironies, comparable? Do modern constitutional monarchies, by providing a veneer of tradition analogous to historic churches with organs & choirs, actually enable more radical social change than republics?  Especially republics that experienced a sort of cultural "freeze" during the Cold War and are now fertile ground for various forms of anti-leftist (but, apparently, rarely pro-monarchist) backlash? Does the same sort of principle apply to religion? As one who tries to be a more or less consistent traditionalist (but unlike some reactionaries is determined to support Europe's existing monarchies) I am not necessarily saying this dichotomy is a good thing, but it might at least be interesting to explore in more depth.
Posted by Theodore Harvey at 7:39 PM 4 comments:

In Europe in the 19th century, everyone knew what politically "right-wing" meant: the defense of pre-Revolutionary royal, aristocratic, and ecclesiastical hierarchies. But somehow in the 20th century after the apocalypse of World War I it was apparently decided--ironically by both proponents and antagonists--that "right-wing" now meant practically anything anyone wanted it to mean...except for its original understanding. As an incorrigible monarchist who refuses to give up on those old hierarchies, I have wavered between attempting to recover that original definition and abandoning Right/Left nomenclature altogether. But whichever path we choose, we must stand firm in refusing to ever accept the abandonment of the old commitment to traditional monarchies, even if it means being dubbed "unrealistic" or "irrelevant." What was right in 1789 or 1848 or 1917 is right today, and what was wrong then is wrong today. (Right-wingers in Germany and Austria tried to "move on" after the fall of their monarchies. We all know what the result was.)

On a vaguely related note, I have not been enthusiastic about Pope Francis, whose liturgical and ceremonial sensibilities seem to be diametrically opposed to my own, but if he's making the sort of Conservative American Catholics (TM) who imagine Catholicism in the US to be virtually synonymous with Republicanism uncomfortable, good for him. (Not that Catholics should be Democrats either. They should, of course, be Altar & Throne monarchists!)
Posted by Theodore Harvey at 12:01 PM 1 comment: