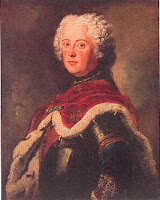 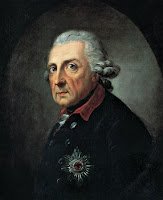 Posted by Theodore Harvey at 9:54 PM No comments:

King Constantine, Queen Anne-Marie, Crown Prince Pavlos and Crown Princess Marie-Chantal (whose voice I don't think I'd heard before) discussed the Greek and Danish monarchies with CNN's Max Foster, unsurprisingly full of affectionate well-deserved praise for the Queen's sister Margrethe II and concern for the situation in Greece. Personally I can't help wishing that His Majesty had not explicitly ruled out restoration of the Greek monarchy as "not on my agenda," though it's admittedly difficult to see how it realistically could be at the moment. As a royalist friend pointed out, the King, 71, has had some health problems in recent years and perhaps one day if Greeks get disillusioned with their chaotic republic the Crown Prince will have a chance.
Posted by Theodore Harvey at 1:45 PM No comments:

Diane Rehm interviews Sally Bedell Smith about her new book Elizabeth the Queen: The Life of a Modern Monarch, including topics such as the fascination of many Americans with the British Monarchy and anecdotes such as HM's priceless reaction to Smith's daughter's plans to get married in London on the Fourth of July: "that's a bit dangerous!" Ms. Smith does an excellent job responding to a question from a listener who doesn't see the point of an "archaic" monarchy, probably better than I would have done since I have little patience for people like that.

(Thanks to my mother Susan Raccoli for calling my attention to this program.)
Posted by Theodore Harvey at 1:45 PM 1 comment: 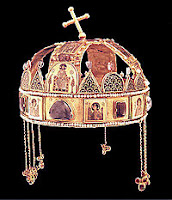 Bill Jamieson, a columnist whose name I had not encountered before but who seems to be something of a kindred spirit, celebrates Hungary's new constitution which has horrified the EU political establishment by removing the word "Republic" from the country's official name, affirming Hungary's roots in Christianity and the Crown of St Stephen, and explicitly repudiating Communism. While the monarchy has not been restored (though as Mr Jamieson points out Archduke Georg seems to be ready), it's definitely a step in the right direction. Long live the Kingdom of Hungary!
Posted by Theodore Harvey at 7:45 AM No comments: 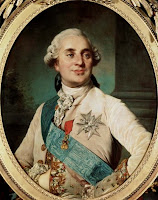 Charles Coulombe reflects on what January means for the very different political systems of republicanism and monarchy.
Posted by Theodore Harvey at 9:25 AM 2 comments:

Forty years ago today, on January 14, 1972, King Frederik IX (a music-loving sailor who liked nothing better than to conduct the Danish National Radio Symphony in his spare time) died, deeply mourned by his family and subjects. In a break with the unique alternating Christian/Frederik pattern that had persisted in Denmark for 459 years since 1513, he was succeeded by his eldest daughter who became Queen Margrethe II. Today Margrethe II, cheered this morning by loyal crowds in Copenhagen after paying her respects with her sisters and their extended family at their father's tomb, celebrates four decades at the head of the ancient Danish Monarchy, the only kingdom in Europe to have maintained both its monarchy and its independence continuously since medieval times. [While Norway and Sweden have also always had monarchies, it was Denmark that dominated the 1397-1523 Kalmar Union, forged by the remarkable Queen Margrethe I (1353-1412).]

It would be difficult to imagine a more gifted and accomplished head of state than Queen Margrethe. In addition to her constitutional duties, the Queen has studied archaeology, designed scenery and costumes for the Royal Danish Ballet, designed some of her own postage stamps, and illustrated the Danish edition of The Lord of the Rings to whose translation the multilingual Queen reportedly contributed as well. Surely this is one queen who may very well have become a well-known figure in her own right even had she not been born royal, but Denmark is all the better for having had her as its Queen. Individuals as talented and likable as Queen Margrethe rarely rise to the top of presidential republics, certainly not continuously for forty years! No wonder that the Danish monarchy is the most solidly popular in Europe, with over 80% support from the public.

As long ago as 1905, when Margrethe's great-great-grandfather Christian IX "Grandfather of Europe" (1818-1906) still reigned and France and Switzerland were the only republics in Europe, the longevity of the Danish monarchy was foreseen. A republican journalist ruefully admitted, "Denmark is by Our Lord chosen as the country that shall retain the monarchical principle until the end of time. When the rest of the world have dismissed their monarchs Denmark will be preserved as a small prehistoric country with a fairytale king, who on the great days of celebrations will ride in a golden coach while the golden apples dance in the fountain in the Old Square. And all the tourists of the world will make pilgrimages to Denmark to see how things were done in the old days." While I of course long to see the monarchical principle thrive widely outside Denmark as well, there can be no doubt that this ancient kingdom indeed retains something of the fairytale spirit and always will.

Recently the Queen [whose English like that of many educated Europeans is flawless, though it's worth noting that her maternal grandmother was Princess Margaret of Great Britain (1882-1920)] reflected on her reign and touchingly expressed her admiration for her British counterpart who is also celebrating a Jubilee this year. While I fervently support all ten of Europe's reigning sovereigns, and feel a particular ancestral connection to the British Monarchy, I've always had a special affection for Queen Margrethe due to her wide-ranging artistic interests, obvious intelligence, and sparkling personality. And in 2000 the Kingdom of Denmark (to which I returned the following summer) was the first current European monarchy I'd ever visited, before I ever set foot in Britain. I'm sure all readers will join me in expressing congratulations to Denmark's outstanding Queen as she and her lucky people celebrate forty years on the throne. Længe leve Dronningen!
Posted by Theodore Harvey at 10:08 AM 1 comment: 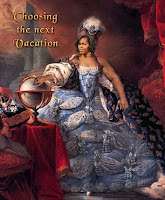 I'm accustomed to regarding the presidents of Europe's post-monarchical republics as boring nonentities, but apparently Germany's is determined to prove me wrong by being a crook. What an improvement! Shoe-toting protesters demanded his resignation in light of the revelation of his threatening phone call to a newspaper attempting to silence its reporting on the loan scandal in which he is involved. Are scumbags like Christian Wulff really what Germans think constitute an acceptable replacement for their ancient royal, ducal, and princely dynasties who shaped and guided everything that is beautiful and meritorious in German history for more than a thousand years, prior to the never-sufficiently-to-be-cursed apocalypse of 1918? It is not just Wulff but the whole pathetic rotten edifice of the Federal Republic of Germany that needs to go. Long live the legitimate German head of state, Kaiser Georg Friedrich I!
Posted by Theodore Harvey at 10:18 AM 1 comment:

Restless republicans in Jamaica and Canada

Naturally I condemn the new Prime Minister of Jamaica and her proposed treason. Given that many ordinary Jamaicans are still loyal to their Queen, some of them even reportedly regretting independence from Britain in 1962, it is not surprising that Mrs Simpson Miller apparently hopes to engineer the change without a referendum, thus avoiding the awkward step of actually consulting "The People" who republicans supposedly love so much. (Note: the fact that people in a constitutional monarchy have voted for a political party whose leaders are republicans, especially when other parties contain the same rot, does not necessarily mean that they all favour abandoning their Queen!) Long live Elizabeth II, Queen of Jamaica! Commonwealth Realms Forever!! Down with republicanism!!!

Meanwhile, similarly-minded Liberal traitors in Canada are hoping to advance the same foul cause. Hopefully this will come to nothing as it always has before. Unfortunately the media persist in advancing the lie that the issue is one of "cutting ties to the British crown," when it is the Canadian crown--a distinct institution since 1867--that is under attack. Don't forget to vote "No" in the poll! God Save the Queen!
Posted by Theodore Harvey at 9:58 AM 2 comments:

As Britain and the world begin a new year, Sir Roy Strong pays tribute to the incomparable Queen Elizabeth II who will celebrate her Diamond Jubilee this year, a comforting beacon of continuity in an often frightening world.
Posted by Theodore Harvey at 10:33 PM No comments: