I admit that the fact that I tend to devote more of my online time to social media is probably the main reason why this blog is not as active as it once was. However, at the moment I am unable to post on Facebook (don't ask), so in case I still have any readers, I will post about this here. Today is the 75th anniversary of the abdication of King Victor Emanuel III (1869-1947) in favour of his son King Umberto II (1904-1983). It has been speculated that if Victor Emanuel III had abdicated sooner, for example in 1943 immediately after the fall of Mussolini, he might have saved the Italian monarchy. However, we'll never know, and many monarchists including me believe that the referendum a month later was rigged by the USA.

Accordingly I have "updated" my Europe 75 Years Ago chart. Sadly, with the 75th anniversary of the accursed Republic approaching, Italy won't be on it at all much longer. And today, even the Royal Family are bitterly divided, as the New York Times reports a little too gleefully. 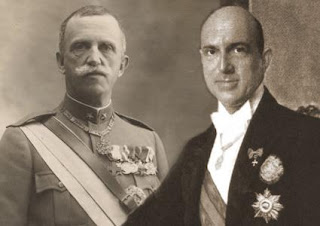