Prompt and thorough coverage as always at The European Royal History Journal. The entire royalist community joins in sorrow with the Greek and extended European Royal Families (especially those of Spain, Denmark, and Britain) in mourning King Constantine. More today: Constantine and Anne-Marie of Greece: A Love Story for the Ages.

Crown Prince Pavlos, born on 20 May 1967 in Athens a month after the colonels' coup that would later first exile and then depose his father, has succeeded his father King Constantine II as Head of the Royal House of Greece and, for monarchists, de jure King Pavlos (Paul) II of the Hellenes. [During the time of the Monarchy (1863-1973), when discussed in English Greek royal names were usually translated into their English equivalents, but the younger generations of Greek royals today generally prefer to use the Greek forms.] The King is dead; Long live the King!

Here are the Telegraph and Times obituaries. The King is often blamed for the political instability that began in 1965, leading to the coup of 1967 that he tried and failed to reverse, but let's not forget that his position that the Prime Minister should not be able to make himself also the Minister of Defense in order to head an investigation into his own son was in itself entirely correct.

Shame on the miserable gang of soulless traitors calling themselves the Greek "Government" for denying King Constantine a state funeral. The King was the internationally recognized Greek head of state for nine years, served in the Greek armed forces, and won an Olympic gold medal for Greece. He was as Greek as anyone has ever been. These scummy politicians were not worthy to tie his shoelaces. I curse and condemn the Greek Republic and pray for its destruction. I reiterate my formal repudiation of any interpretation of Christianity that concedes the application of Romans 13 to republics that have displaced monarchies, and urge the denunciation of this pointless cruelty from every Orthodox Christian pulpit in the world. 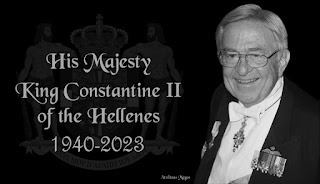 His Holiness Benedict XVI (née Joseph Ratzinger), who reigned as Pope of the Roman Catholic Church and Sovereign of the State of Vatican City from 2005 to 2013, has died at 95, nearly four months after Queen Elizabeth II.

I particularly appreciated his love of classical music and concern for liturgical Beauty, without which in general I confess that it’s unlikely Christianity ever would have appealed to me. He cared, and understood. Aesthetics Matter. A highlight of his pontificate was his September 2010 visit to the United Kingdom. His delight at the Anglican choral tradition at Westminster Abbey was evident, and his pontifical mass at Westminster Cathedral was a musical feast of Byrd and Bruckner. 🇬🇧

Many commentaries will probably not mention that as a young man in 1951 he was ordained to the priesthood by Cardinal Michael von Faulhaber (1869-1952), a Bavarian monarchist who had also conducted the funeral of King Ludwig III (1845-1921) thirty years earlier and never abandoned his belief in the Monarchy. As the former Fr. Ratzinger was the last living priest ordained by Cardinal von Faulhaber, his death breaks a last living link with the Kingdom of Bavaria.

The undoing of his greatest accomplishment, the 2007 liberalisation of the Latin Mass, by his successor is a terrible tragedy.

I wish he hadn’t abdicated. But perhaps that’s not for us in this world to ever understand. May he rest in peace. 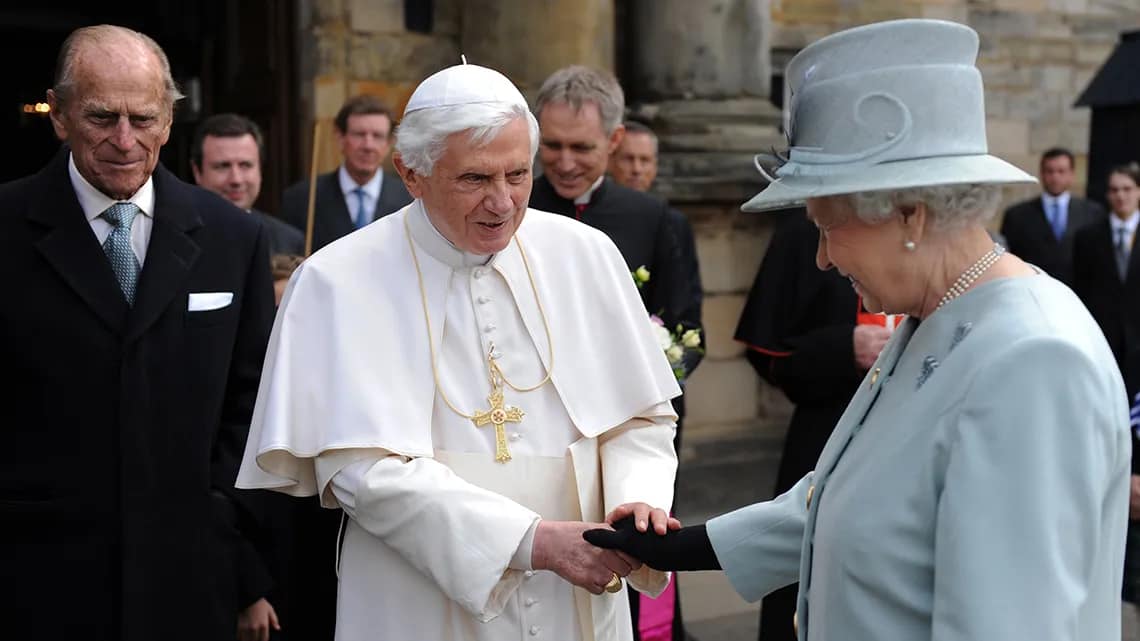 Posted by Theodore Harvey at 11:37 AM No comments:

Here are two reflections on the death of Queen Elizabeth II by Anglican friends of mine: "Our Gloriana," by Bishop Anthony Burton (Rector of Church of the Incarnation 2008-22, who baptized me there in 2009) and "The Quiet Empire of Her Majesty Queen Elizabeth II" by Timothy Martin. 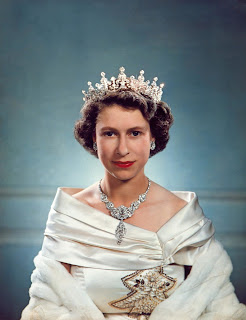 [Edit: and here is one from a Catholic friend at Georgetown University: The Queen's Jesuit Values.]

Posted by Theodore Harvey at 2:02 PM No comments:

Australian Monarchists and their Queen

Congratulations to my friend, Australian composer and monarchist Alexander Voltz, on this excellent and emotional article on the experiences and reflections of Australian monarchists. (Warning: a disturbing passage from a vile student "newspaper" is quoted.) Other young Australian monarchists are quoted in this article, which also quotes republicans.

A new poll indicates that about 60% of Australians favour keeping the Monarchy, up from previous levels. 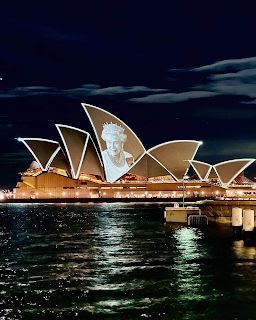 Posted by Theodore Harvey at 3:40 PM No comments:

The Dallas Morning News reports on Tuesday's Choral Evensong in thanksgiving for Queen Elizabeth II at St. Matthew's Cathedral, in which I sang (music of Vaughan Williams, Stanford, and Parry). I am quoted in the article. Needless to say I don't endorse every comment of the homilist. But it was a lovely event and I'm glad it's been publicized. 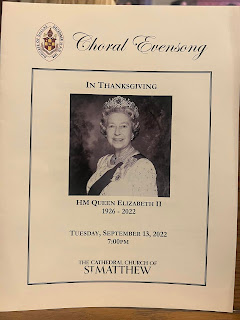 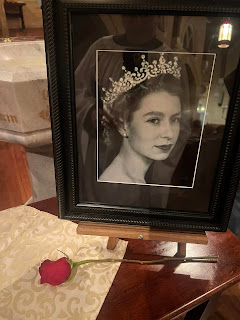 Posted by Theodore Harvey at 1:48 PM No comments:

This is not a decision I made lightly. I thought about it for a few days. And I don't regret buying the historic Sept. 9 front page which is a significant historical document. But I've cancelled my electronic subscription to the New York Times. I'm fed up with their relentless anti-British bias and negative coverage of the United Kingdom. That stupid article (whose author I'm now ashamed to have met in 2012; I had thought she was better than that) blaming the Queen for "colonialism" within hours of her death was the last straw. And Anglophobia is hardly their only pernicious agenda; a good monarchist friend of mine also has strong objections to their Ethiopia coverage. The sad thing is that they still have plenty of good articles and I'm sure there will be some I wish I could read. But if you knew a substance were 90% ice cream and 10% poison would you eat it? I'm not going to give one more cent to an enemy of my favourite country. God Save the King.

More articles on this topic:

Posted by Theodore Harvey at 11:07 PM No comments:

On Mourning the Queen as an American Monarchist

Probably my greatest weakness as a Christian is that while this should not be construed as ingratitude for the positive aspects of my real life I’ve never been able to overcome a certain theoretical resentment at having been born American rather than British, which prevents me from ever feeling quite as docile to God’s will as we’re apparently supposed to, as indeed the late Queen herself was. Indeed, my whole way of being Christian as an Episcopalian is so deeply intertwined with Anglophilia and the Monarchy (which for an Anglican in England would be nothing abnormal) that I don’t know how to separate the two. It’s all sort of the same thing for me, which I suppose is why I tend to see “British” republicans as utterly evil enemies of God, akin to the monstrous orcs in Lord of the Rings, rather than as simply people I disagree with.

As lovely as last night’s Evensong [in thanksgiving for the life of Queen Elizabeth II at St. Matthew's Cathedral] mostly was, there were still a few lines in the homily that made me wince, as did the fact that even on this most inherently royalist of occasions the officiant still sang “State” rather than “King” during the (Smith) Responses. Even many Americans sincerely paying tribute to the Queen feel obliged to include some sort of republican disclaimer, which I never like, because I wholeheartedly believe that “our” way is wrong and theirs is right. I suppose a certain such discomfort is inevitable as long as I live here, and I don’t seem to be moving. But with all my heart I reject 1776 and all its works. God Save the King. 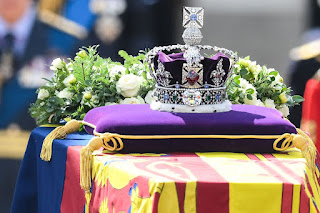 Posted by Theodore Harvey at 10:07 PM No comments: