This evening I'm leaving for England, where I will spend nearly five weeks on tours with the two Anglican choirs in which I sing. I look forward to what should be a fantastic experience. Blogging will probably be less frequent than usual, though I hope to check in occasionally. Apart from the obvious attractions for a monarchist of being in the United Kingdom, I look forward to meeting a number of monarchist contacts, including some members of my forum. Here is my itinerary for readers to follow if they wish.

Tour I: Choir of the Church of the Incarnation

August 3-6: I will be staying with a monarchist friend in Northern England.

I am grateful to those responsible for maintaining the websites of UK Cathedral Music Links and the Campaign for the Traditional Cathedral Choir for their assistance in promoting these tours.
Posted by Theodore Harvey at 9:27 AM No comments: 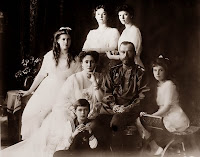 I have little original or new to say about this tragic anniversary, but recommend the posts at Mad Monarchist, Sword & Sea, Tea at Trianon, and Wilson Revolution Unplugged.
Posted by Theodore Harvey at 11:15 AM No comments:

Anarcho-capitalist Stephan Kinsella, though not a monarchist, dissents from the prevailing view that the American Revolution was a wonderful thing. A vigorous debate ensues. [To address the argument that modern Britain, though a constitutional monarchy, is hardly a model of limited government, I would point out that it was only the emasculation of the Crown and the [hereditary] Lords in favor of the Commons (and increasingly, of even the Commons in favor of the European Union) that made this possible.]

Along the same lines, the late John Attarian's 2003 "Hurrah for King George!" is always worth re-reading.

As a monarchist, for whom monarchy is a positive good and not merely a "lesser evil," I obviously believe anarcho-capitalists to be wrong to suggest that the state could or should be dispensed with entirely. But recognition that the replacement of kings with presidents and other non-hereditary sorts of rulers increased, rather than decreased, the potential for tyranny is always welcome.
Posted by Theodore Harvey at 6:30 PM No comments:

I'm currently in Vail, Colorado, where the Dallas Symphony is in residence at the Bravo! Vail Valley Music Festival. I hadn't expected to find much of a monarchical nature, though it was not far from Vail that Alfonso de Bourbon (1936-1989), father of the current "Legitimist" pretender to the French throne, was killed twenty years ago in a skiing accident in Beaver Creek. On a happier note, however, I was delighted to discover yesterday when wandering into a charming art gallery, "The Englishman," that one of their paintings, "A Mountain Landscape," had been painted in 1868 by King Carl XV of Sweden & Norway (1826-1872)! I didn't really have $58,000 to spare, but the clerk kindly printed out a copy for me. I hadn't known of Carl XV's artistic abilities, but apparently they were considerable.
Posted by Theodore Harvey at 3:47 PM 3 comments: