On this date in 1713, three hundred years ago, the first King in Prussia, Friedrich I, who established the first German kingdom of modern times died and was succeeded by his son Friedrich Wilhelm I (pictured). Friedrich Wilhelm I, who married a daughter of George I of Great Britain, would go on to reign for twenty-seven prosperous and mostly peaceful years, proving to be a capable and benevolent ruler, unless you were his son (ask Friedrich II). 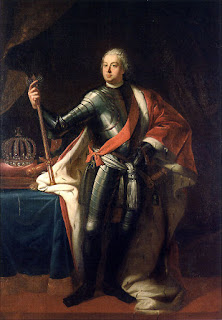 Posted by Theodore Harvey at 5:52 PM No comments:

The embezzlement scandal surrounding Iñaki Urdangarín, husband of the Infanta Cristina, is increasingly embarrassing for the Spanish royal family, as the New York Times reports, though he says his wife and in-laws had nothing to do with his business dealings.  While I feel for the King and support the Spanish monarchy unconditionally, I can't help feeling that if princesses still married princes instead of commoners, we wouldn't have problems like this.
Posted by Theodore Harvey at 10:41 AM 1 comment:

Today is the 400th anniversary of the election of 16-year-old Michael Romanov as Tsar of Russia, ending the Time of Troubles and establishing the great Romanov dynasty, which would reign for the next 304 years. May it do so again! Боже, Царя храни! 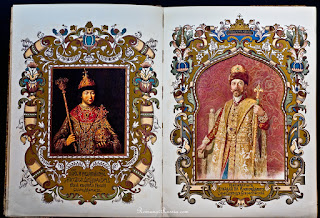 It's hard to know exactly what to think of Vichy France, but I think this comment of mine posted today at The Thinking Housewife adequately sums up a royalist's necessary ambivalence regarding France in World War II, during which there were many villains and few if any untarnished heroes from our perspective:

I was disappointed to see one of your contributors regurgitate, without being challenged by anyone, the standard simplistic liberal “Resistance Good/Collaborators Bad” line.  In France during World War II there were no easy answers and probably no spotless “good guys.”  But “conservative Catholics” would have had valid reasons for regarding the “collaborationist” Vichy regime as the lesser evil, and indeed many conservative Catholics were to be found among the ranks of real or alleged “collaborators.”  The Resistance may have included some conservative Catholics, but it was a predominantly left-wing movement and became increasingly so towards the end of and after the war, ruthlessly purging France of rightists, who were often shot without trial.  Who were the “enemies of France” in the 1940s?  (For that matter, who were the “enemies of France” during the Revolutionary wars of the 1790s?  I would say that at that time loyalty to Catholic & Royal France required “treason” to the regicidal Republic.)  The question is not as simple as it sounds.  From an authentically French traditionalist, i.e. royalist, point of view, the Third Republic (1870-1940) was not really a legitimate entity to begin with and once defeated was not automatically entitled to the loyalty of right-wing Frenchmen.  I think you would find that in some ways the social policies of the “collaborationist” Vichy regime (whose traditionalist motto “Work, Family, Fatherland” replaced the Jacobin “Liberty, Equality, Fraternity”) were closer to the worldview espoused by “The Thinking Housewife” than those of the various French Republics before or since.  I say this as a person of partially Jewish ancestry totally opposed to Nazism, but also totally opposed to Communism and French republicanism.
Posted by Theodore Harvey at 2:24 PM No comments:

So the fake "right-winger" Marine Le Pen says that the anti-papal "Femen" naked protest in Notre Dame Cathedral was "a violation of republican values." No, no, no, a thousand times no! It was a perfectly logical and natural expression of "republican values," which are anti-Catholic to the core. Has she never heard of the prostitute enthroned as "Goddess of Reason" at Notre Dame during the Revolution? This is the problem with the whole French so-called "Right": they still believe in the Republic instead of admitting that it is a diabolical illegitimate abomination that must be destroyed. Death to "republican values" and Vive le Roi!
Posted by Theodore Harvey at 2:13 PM 3 comments:

Thousands of Cambodians gathered to mourn their late King Norodom Sihanouk (1922-2012) in an elaborate funeral procession.
Posted by Theodore Harvey at 10:39 PM No comments:

Archaeologists of the University of Leicester have confirmed that remains found under a Leicester car park are indeed those of King Richard III.  It's a good day when top news headlines concern a 15th-century king. Whatever the truth about Richard III, congratulations to the University of Leicester archaeological team on all their hard work. And Requiescat in Pace.
Posted by Theodore Harvey at 11:21 AM No comments: