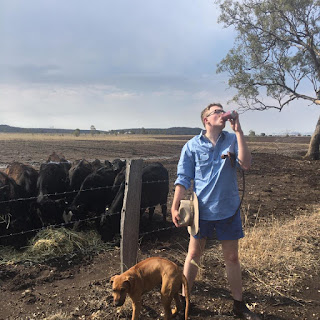 I am in shock. It seems that one of my closest Facebook friends, Australian monarchist Wilson Gavin, was found dead this morning in Brisbane at the age of 21. It is in the news but I would prefer not to link to any article. He was an amazing person and Queen Elizabeth never had a more loyal subject. We had been friends since 2014 but had never met, but I felt that I knew him. We chatted frequently, most recently on Wednesday. Let no one ever tell you that online friendships aren't real. This one was. I am utterly devastated. I don't know his family but can only try to imagine how they must be feeling. This was his most recent Facebook profile picture. Rest in peace, beloved friend.

There is so much grief now, and yet I would not for a second be without the past 5+ years of friendship with him. I wish, bitterly, that I had made it to Australia once during that time. I couldn't go to New York during his one visit to the USA. We talked about perhaps coordinating a European trip one day. For all his love of the Queen and the Monarchy, which he firmly believed was every bit as Australian as it was British, I don't think he ever made it to the United Kingdom, though he'd been to continental Europe. ("I couldn't possibly stay so long in a republic," he replied when I asked if he was still in Greece.) But of course when one's friend is only 21 one thinks there is all the time in the world. With many of the friends I've met online via common interests, our points of view overlap, but we also argue. Wilson and I never really disagreed about anything. He was Australia's finest. I think the best way to honour him is to make sure everyone knows how remarkable he was and continue the fight to preserve Australia's constitutional monarchy forever. And if you ever find Twitter toxic, get off it. I did in April and have never missed it. While social media has undeniably had benefits, including this very friendship, it also has its deadly poisonous side. I hope one day the plague of cyber-bullying will end. I will miss you so much Wilson. You were so brave, brilliant, and fun. God Save the Queen. 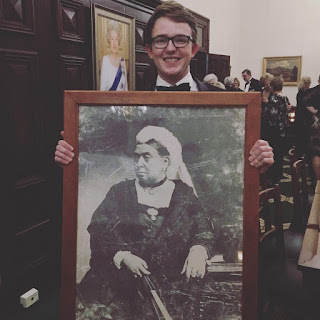 Brazilian monarchism in the news

Like most of my Brazilian monarchist friends, I think the association with Bolsonaro--who will inevitably fall from power eventually--is a mistake. Nevertheless, the Brazilian monarchist movement is among the most vibrant and visible in any former monarchy in the world.
Posted by Theodore Harvey at 12:26 AM No comments:

I've always thought of myself as nonconformist and counter-cultural, but occasionally I'm reminded that there are people who have never read or seen Harry Potter and people who have never watched Game of Thrones, which I have, not because they were popular, but because stories about castles, wizards, dragons, and kings are the sort of thing I like and have always liked. But I think refusing to worship Democracy, venerate the American founding, or accept the legitimacy of republican governments of formerly monarchical countries demonstrates rather more contrarianism than refusing to experience a particular book or television series.
Posted by Theodore Harvey at 8:18 PM No comments:

One reason I have trouble understanding "normal" contempoary people is that I don't believe in unconditional geographical patriotism. I believe in loyalty to Monarchs, not loyalty to "Countries." While fond of some specific places that happen to be located within the USA, I feel nothing for the USA as a whole as a political entity, and while I love England and the United Kingdom, if God forbid Britain ever abolished the Monarchy, I would regard the new republic(s) as my enemy. Had I (or a version of me) been Brazilian in 1889, Portuguese in 1910, Russian in 1917, German or Austrian in 1918, Italian in 1946, Greek in 1974, or Iranian in 1979, I would have then felt that I had no country and no obligations of any kind to the new regime, preferring death (with which I'm sure the Bolsheviks or the Mullahs in particular would have been happy to oblige) or exile to obedience. So the mentality of Iranians who, the New York Times tells us, don't much like the Islamic Republic regime but are nevertheless rallying to it in patriotic anger is incomprehensible to me. I don't accept that countries have the right to abolish their monarchies, or come into existence by revolting against their monarch, and still expect the kind of automatic loyalty that would have been natural when the world was relatively sane and properly ordered.
On a related note, I find the mentality of Catholics who know that the Latin Mass is superior but nevertheless willingly attend Novus Ordo "masses" they find repulsive similarly incomprehensible. (I'm not worried that this will actually happen, but if traditional music & liturgy disappeared from my Episcopal parish, so would I.) I guess I'm not very good at Obedience.
Posted by Theodore Harvey at 1:56 PM No comments:

On the internet I sometimes see monarchists, perhaps especially religiously conservative American monarchists, make arguments that rely on blaming the U.S. republican form of government for various contemporary phenomena that they (and presumably their audience) dislike. While my lack of enthusiasm for Americanism is well known, I honestly think this is a mistake, because it can easily be pointed out that the same phenomena exist in contemporary European and Commonwealth constitutional monarchies. If you wish to criticize modern laws and social developments that are not unique to the USA or republics, you're really arguing against Democracy, Secularism, and Modernity, not republicanism per se. Now traditionalists and reactionaries who are also monarchists have every right to make those arguments. But I think discussion of Monarchy versus Republic has to be kept somewhat distinct from them.  Let's make sure that we're defending Monarchy on its own merits and for its own sake, as an institution compatible with the modern world, even if there are other aspects of that modern world that we dislike and hope to change.
Posted by Theodore Harvey at 5:34 PM No comments:

Sorry for the lack of recent activity on this blog. It was good to see one of its few regular interactive readers again in person last month in New Jersey. Here is something I started typing on Facebook but decided I'd rather put here instead. (There's a lot I could post about here, including my recent monarchist-themed trip to NY and NJ, but generally by the time I get done documenting everything on Facebook I tend not to feel like also making a blog post. Any remaining blog readers who want to see my monarchist posts are welcome to "Friend" me at facebook.com/royalcello ; please include a message indicating that you've been a reader of my blog.)


I love my Catholic monarchist friends, but it saddens me that Catholic monarchism appears to be almost exclusively a lay thing. Are there ANY Roman Catholic priests or bishops who publicly advocate the restoration of defunct Catholic monarchies? (Note: devotion to Emperor Bl. Karl, while encouraging and praiseworthy, is not exactly the same thing as promoting the restoration of the Habsburg monarchy--as some non-political devotees of Bl. Karl would probably be quick to point out!)
As an Episcopalian, I have several Anglican clergy Facebook Friends who are more or less sympathetic to my views, though I can't help suspecting that some of them must raise their eyebrows at my stridency occasionally. I wonder what Roman Catholic priests would think of a Catholic version of me. (Even if I were RC I would still chafe at the non-infallible, republic-appeasing political judgments of Leo XIII and Pius XI, before we even got to Vatican II.) Anglican monarchism is of course fundamentally different anyway as the only Monarchy of our particular tradition is still intact, allowing Anglican monarchists to be more "conservative" (in the sense of defending something that currently exists) than Roman Catholic monarchists whose greatest examples (apart from Spain, which presents its own problems) are long gone. That's why Anglican monarchism (though mine isn't always) can be modernity-accommodating, moderate, and pragmatic but Roman Catholic monarchism (even if its proponents are more prudent and polite than I am, which many of them are) will inevitably be accused of "LARPing" (I hate that expression!) and of being "unrealistic" and inherently reactionary, despite the survival of five (six or seven if the Vatican itself and Andorra are counted) nominally Roman Catholic monarchies in modern Europe.
Posted by Theodore Harvey at 12:15 PM 4 comments: