Last night I went to see the latest royal period drama, A Royal Affair, a visually lush and compellingly acted Danish film concerning the ill-fated relationship of Denmark's British-born Queen Caroline Matilda (1751-1775) (Alicia Vikander), sister of King George III, with the progressive Dr Johann Struensee (1737-1772) (Mads Mikkelson), physician to her eccentric (though perhaps not literally insane) husband King Christian VII (1749-1808) (Mikkel Boe Følsgaard).  Struensee, enjoying in different ways the favor of both the King and the Queen, briefly rose to become the de facto ruler of Denmark, implementing many progressive reforms influenced by the Enlightenment, before falling from power just as dramatically.  He lost his life and Caroline her freedom and her children, dying at 24 in Germany three years later.

Despite some obvious heavy-handed liberal bias (We Must Tell the Audience in the Prologue how Oppressive the Nobility and the Church were, Just So They Know), which in any case is more anti-religious than anti-monarchist, I found the movie impressive and enjoyable both as entertainment and as an introduction to a fascinating episode in royal history which is not very well known, at least outside of Denmark.  I'm not sure how close the movie is to historical truth, though I do know that if you're going to criticize religion, you should at least try to get your denominational facts straight: since when do Lutherans threaten sinners with Purgatory?

The "villains" of A Royal Affair are not the Monarchy per se, not even the undeniably difficult and unstable King Christian, though his stepmother Queen Juliane (1729-1796) (Trine Dyrholm) is depicted as a classic wicked stepmother, as she probably would have seemed to Caroline.  Rather, the primary culprits (besides the main characters' own recklessness) in Caroline and Struensee's downfall are unscrupulous politicians such as could just as easily surface in any republic.  And critics of the Enlightenment might even take some grim comfort in the way Struensee eventually has cause to regret and reverse his reckless abolition of all censorship.  Even the written epilogue makes it clear that it was with the Monarchy, under Christian and Caroline's son Frederik VI (1768-1839) (William Jøhnk Nielsen), that Struensee's liberal vision triumphed in the end.   And of course Denmark, unlike far too many other countries, happily remains a constitutional monarchy today, under the impeccably admirable and talented Queen Margrethe II--a direct descendant of Queen Juliane, via her son Prince Frederik (1753-1805) (Frederik Christian Johansen).
Posted by Theodore Harvey at 12:20 AM No comments:

Liberty, the God That Failed

I spent the past weekend in the Carolinas visiting friends, including a fellow royalist with whom I'd celebrated the Diamond Jubilee in London in June.  It was a wonderful trip all around, but what I want to post about here is the book I finished reading on the airplane, Christopher Ferrara's monumental Liberty, the God That Failed: Policing the Sacred and Constructing the Myths of the Secular State, from Locke to Obama.  Mr. Ferrara, a traditional Catholic lawyer and scholar with whom I have periodically corresponded for years, delivers a substantial and eloquent Catholic approach to American history, skewering the myths of Left and "Right" with equal clarity.  While uncompromisingly Catholic, his thoughtful and fair-minded approach makes his subject compelling to readers of other religious beliefs as well, perhaps especially Anglicans since he has no problem siding with the Anglican British Crown against radical Protestants and Deists.

Of particular interest to American monarchists will be his thorough demolition of the American Revolution, which he shows beyond any reasonable doubt to have been unjust and hypocritical from the beginning, resulting immediately (and not only in the 20th century as imagined by some American conservatives) in a government far more oppressive than that of King George III had ever been.  While I of course already held Tory/Loyalist convictions, it was pleasing (if also infuriating, since there is not much we can do about the Revolution now) to see them confirmed and bolstered with copious citations and evidence.  Mr. Ferrara meticulously avoids the possibility of being accused of anachronistically judging the past by present-day standards by frequently citing sources from the periods he discusses that confirm his points.  Whether you share Mr. Ferrara's Catholic or even Christian beliefs or not, I highly recommend this book.  Those who already oppose the American Revolution will be invigorated with new ammunition, and those who cling to the myth that it was in any way "conservative" or compatible with Christian teaching will profit from having their illusions shattered, however uncomfortable that process may be.
Posted by Theodore Harvey at 10:46 AM No comments:

The storming of the Bastille in 1789, and the repulsive French holiday celebrating it (spare me the technicality that the holiday officially commemorates the ephemeral Fête de la Fédération a year later), is not the only historical event that makes July 14 an ironic birthday for a monarchist.  On that date in 1958, exactly twenty years before I was born, a clique of Iraqi army officers massacred their young King Faisal II and his family, paving the way for the dictatorship of Saddam Hussein and all the chaos and misery that followed.  Disgracefully this date has been a holiday in Iraq for years, but recently Iraqis have been prompted by an unprecedented exhibition in Baghdad on the monarchy to re-examine their royal history, as reported by the Christian Science Monitor and the Alaska Dispatch.  Unsurprisingly for monarchists, the Kingdom of Iraq (1932-1958) now seems like a golden age in retrospect.  When will the world ever learn?

Most regular visitors to this blog probably know that I am a professional cellist.  Usually I perform as a member of the Dallas Symphony, but on Sunday I had the honor to perform the Cello Concerto (1956) by Sir William Walton (1902-1983) as soloist with the New World Youth Symphony Orchestra (of which I was a member from 1987 to 1996) conducted by Susan Kitterman in Indianapolis.  Anyone wishing to listen to the performance can hear it at this "Dropbox" link!  Please enjoy.

My biography in the program concluded as follows: "A keen royalist and Anglophile, Mr. Harvey would like to dedicate today's performance of the Walton concerto, which coincides with Remembrance Sunday in the UK, to HM Queen Elizabeth II in recognition of her Diamond Jubilee year."  Royalists may also be interested in the program notes I wrote which draw attention to Walton's work for the coronations of George VI and Elizabeth II. 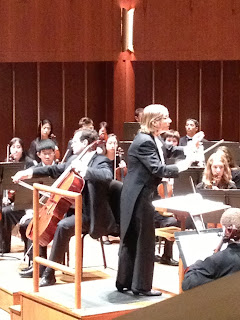 Posted by Theodore Harvey at 2:58 PM No comments:

Why I Won't Vote

I've written an essay, originally for Facebook, explaining why I will not be participating in the U.S. presidential election tomorrow.  It is available at my website here.
Posted by Theodore Harvey at 4:27 PM 6 comments: