I was too busy in Chicago on Saturday to worry much about that horrid holiday the French insist on celebrating on my birthday, but here's an article on French monarchists from 1985, when I was seven years old.  At that time I must admit I would not have been able to correct its genealogical errors: the Count of Paris was (and is) a direct, not "indirect," descendant of Hugh Capet, while the Prince Napoleon was (and is) descended from Napoleon III's uncle Jerome, not from the last Bonaparte Emperor himself.  It's kind of depressing that not much has changed in 27 years other than the identities of the pretenders.  But the longevity of French royalism despite seemingly endless "irrelevance" just demonstrates that monarchists never give up, no matter how marginal the world tells us we are, no matter how stubbornly the French stupidly keep electing new presidents, as if that will ever solve anything.  Vive le Roi!
Posted by Theodore Harvey at 9:27 AM No comments: 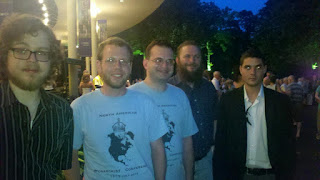 Yesterday I returned from a wonderful weekend in Chicago with monarchist friends from Facebook, only one of whom I had met before.  More than 150 people had been invited to this "North American Monarchist Conference" (complete with official shirts), and quite a few wanted to come, but as it turned out only five of us were able to actually do so.  Nevertheless what we lacked in numbers we made up for in enthusiasm.  Of the five attendees, one (me) was Anglican, one was Roman Catholic, and three were Orthodox, so all three "branches" of Christendom were represented, as were three U.S. states (Illinois, Texas, New York) and Canada.  While no "manifesto" was produced (any conference would probably need to have more than five participants to be considered authoritative!), there was general agreement that some sort of collaborative book ought to be produced.  More importantly, we all had a good time conversing on a wide range of monarchical and religious topics with like-minded individuals.

The agenda for the weekend included a wide range of cultural, social, and religious activities.  We began Friday evening with a terrific concert at Ravinia by the Chicago Symphony of music by Johannes Brahms (1833-1897), a conservative loyal subject of the German monarchy.  On Saturday we visited the Art Institute of Chicago, whose vast collection includes portraits of Magdalena of Saxony (1507-1534) (wife of Elector Joachim II of Brandenburg), the young Don Juan of Austria (1547-1578) (natural son of Emperor Charles V who led Christendom to victory at Lepanto), and Marie de' Medici (1575-1642) (wife of Henri IV and mother of Louis XIII of France), as well as German armor from the time of Maximilian I and other late medieval Holy Roman Emperors.  Even pre-revolutionary European art that is not specifically monarchical reflects the general sensibilities of a vanished Christian, hierarchical, and predominantly agrarian civilisation healthier and more beautiful than our present one, a civilisation that not coincidentally accepted the rule of hereditary kings and princes as natural.  For this excursion we were a much larger group as one of the Orthodox attendees brought along his wife and seven young children--monarchists of the future!

After the Art Institute we briefly visited Queen's Landing on Lake Michigan where Queen Elizabeth II arrived for her visit in 1959.  Unfortunately there is not as far as we could tell any sort of plaque commemorating the occasion; perhaps there should be!  For dinner we met at the Red Lion British pub, complete with a British flag and portrait of Lord Nelson, where I had a unique and delicious "Colonial Chicken" entree and a free "Spotted Dick" dessert with a candle for my [34th] birthday--all in all a great way to celebrate, much better than whatever was going on in France that day!

On Sunday the Orthodox participants went to their Divine Liturgies while I attended a beautiful Solemn High Mass at the Anglo-Catholic Church of the Ascension.  We all subsequently met for a farewell lunch at Chicago's unique Bosnian Restaurant Sarajevo--perhaps ironic in light of what happened at the city of that name in 1914, but offering tasty food with an appropriate elegant "Old World" feel.  I thoroughly enjoyed getting the chance to spend time with four enthusiastic and knowledgeable fellow monarchists and hope that such gatherings become a regular event with more participants attending next time!

Many contemporary British conservatives, including some I know and respect, seem to regard the advocacy--even in theory--of restoring the hereditary peers shamefully expelled from the House of Lords by New Labour in 1999 as unrealistic and irrelevant.  Instead they focus on opposing Nick Clegg's plans for a mainly elected House, as seen in the recent superficially successful Tory "rebellion."  But I agree with Peter Hitchens: a mainly appointed upper house is indefensible and the real damage was done in 1999.  Traditionalists understand that "a mainly hereditary House was superior in every way" and that "tradition, inheritance and nobility are things which are good in themselves, coupled with a sensible scepticism about that upstart idea called ‘democracy’ – which in Parliament means that the members are chosen, controlled, rewarded and punished by a centrally-directed party machine subject to the executive."  Is there anyone else in print in a major newspaper who dares to defend, not some vague compromise that in the end satisfies no one, but the role of hereditary peers who served Parliament well for six hundred years?
Posted by Theodore Harvey at 10:52 AM 2 comments:

For the first time, Nepal's ousted King Gyanendra has explicitly stated that he would like to be restored as a constitutional monarch.  (If only we could get similar declarations from more former and would-be monarchs!) As any monarchist could have predicted, Nepal's politicians have utterly failed to agree on a constitution or improve anything for anybody in the four years since they thoughtlessly and traitorously abolished the 239-year-old monarchy in what I fervently hope will remain the only downfall of a monarchy in my politically conscious lifetime.  If Nepalis have any sense they will take their former king up on his offer!
Posted by Theodore Harvey at 7:24 PM No comments:

I don't usually link to left-wing articles, but this piece by Sunder Katwala is a decent one, admitting that republicanism has failed spectacularly to convince the British public of any merit to its agenda.  According to Mr Katwala, progressives can and should even find valid reasons of their own to support, or at least accept, the persistence of the monarchy. And it is good for right-wing monarchists to acknowledge that the modern British Monarchy is and must remain a monarchy for everyone, including people like Mr Katwala, at least everyone who is not an outright abolitionist.
Posted by Theodore Harvey at 9:27 AM No comments:

Royalists and Anglophiles in the U.S. will want to be sure to catch Sir Trevor McDonald's new documentary Queen & Country, airing on PBS the next three Sunday evenings.  Having been away from home I missed the first episode on TV that aired July 1, but fortunately it is available in its entirety online at the PBS site, so I watched it tonight.  At times I thought the editing was a little strange in that the film would occasionally disrupt continuity by abruptly returning to interviews that had appeared earlier with unrelated material in between similar comments.  More substantially, I disagreed with author Miranda Carter's claim that royal pageantry does not really predate Queen Victoria (what about George IV's famous visit to Scotland? the Thames pageants of Charles II and George II?).   Otherwise I enjoyed the programme with its excellent footage and can recommend it to all interested in the British Monarchy.
Posted by Theodore Harvey at 11:43 PM No comments: 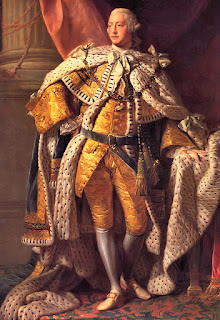 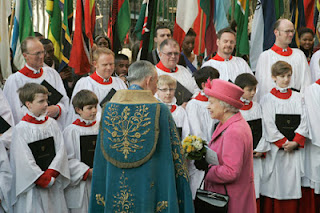 Monarchists can breathe a sigh of relief now that more than three fourths of Liechtensteiners have voted to preserve their prince's veto powers.  (Can you imagine a presidential candidate getting 76.1% of the vote?)  For once the majority were right!  Meanwhile, however, the rest of Europe languishes without its monarchies.  I'm not a fan of the modern European project, but it's refreshing to see its advocate Istvan Deak acknowledge that it needs an Emperor, and that the Austro-Hungarian Empire was preferable to any of its successors.

On a rare non-monarchical note I'd like to share this delightful little video from Oxford, the first in a series, on the choral tradition at that great ancient university.
Posted by Theodore Harvey at 3:55 PM No comments: