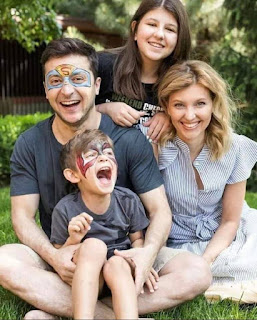 As a monarchist I generally don’t take sides between republics. But in this charming photo of the President of Ukraine and his family, we can glimpse an echo of what is superior about monarchy and what is missing in modern Russia. Putin is, as the exiled Kaiser Wilhelm II once observed about a certain other leader to whom Putin is now increasingly compared, a man alone. We know nothing of his family. There is never any indication of what his vision might be for a post-Putin Russia. It is all about him. There is no sense of the nation as a family, for which children must be the priority. This is something that Europe’s royal families provide in abundance (such as the Duke & Duchess of Cambridge who met the Zelenskyys in 2020 and voiced their support today), but which is also missing from Western Europe’s curiously numerous childless elected leaders.

Ukraine, like Poland, Finland, and the Baltics, presents a dilemma for monarchists. We might nostalgically prefer the pre-1914 map. But after everything they endured at the hands of the Soviets in the 20th century, it would be heartless to fail to understand why their peoples want to remain independent from Russia, a Russia no closer to Romanov restoration than it was 30 years ago and in which some monuments to Lenin including his mausoleum (which should have been demolished in 1991) and Soviet place names survive, as does the Russian occupation (as “Kaliningrad”) of what was once Germany’s historic East Prussia. Russia has yet to fully confront and repent for the crimes and horrors of the Soviet Union, a monstrosity of which no one should be proud. For all these reasons and more the susceptibility of some monarchists and right-wingers to Putin apologism saddens me.
But who would be King of Ukraine? If Mr. Zelenskyy can win this war, perhaps he should be. While ideally kings should be born to their role, it’s happened before: Sweden, Serbia, Albania, and Iran come to mind. They could do a lot worse.