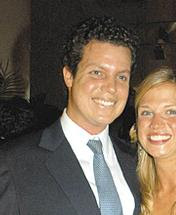 The Imperial House of Orléans-Bragança has confirmed that Prince Pedro Luíz (b 1983), fourth in line to the Brazilian throne, was among the 228 people aboard the Air France flight that disappeared over the Atlantic Ocean. Authorities do not expect to find any survivors. My condolences to the Brazilian Imperial Family, Brazilian monarchists (some of whom, given his uncles' links to the controversial militant Catholic association TFP, had pinned their hopes for the future of Brazilian monarchism on Pedro), and all those who appear to have lost loved ones in the disaster.

The above picture shows Pedro with his double first cousin Princess Alix de Ligne (b 1984), who was to be on the same flight but had decided to take a different one. Pedro's younger brother Prince Rafael (b 1986) is next in line and presumably must now tragically be considered to have replaced him in the succession.
Posted by Theodore Harvey at 4:21 PM

You mentioned that TFP is "controvercial" and "militant". I have encountered them every year on the march for life in DC, and the seem to be very friendly with the ICRSP (many of them introduced themselves to Fr. Hellmann), and some, even in the US, appear to be monarchists.

I haven't heard much about them, good or bad. I like their color-guard dress, and their style. What is controversial about them? Anywhere where I can get more info?

You always seem more in-the-know about Catholic groups than Catholics. I'm certainly happy you're an ally, not an enemy :)

TFP are controversial even within right-wing Catholic circles for at least two reasons that I've read about: an alleged tendency to encourage devout young Catholic men who might seem to be likely candidates for the priesthood to remain celibate but not become priests (devoting their energies to TFP instead), and an alleged over-the-top, "cult-like" devotion to their founder Plinio de Oliveira and his mother, with reports of a TFP "hymn" about Mrs. de Oliveira using language more typically associated with the Blessed Virgin Mary. I am not sure how much truth there is in these allegations but even Charles Coulombe (not known for criticizing his fellow Catholic monarchists) has described the TFP as "a bit strange."

Perhaps ironically, the TFP--despite their own "cultish" reputation, alleged tendency to discourage vocations, generally "pre-conciliar" attitudes, and preference for the Latin mass--have always officially maintained strict loyalty to Rome, avoided criticism of Vatican II and the recent popes, and opposed the SSPX and its Brazilian former allies in Campos. Prominent traditionalist Atila Sinke Guimares broke with the TFP for this reason.

In Brazilian society at large, TFP are unpopular for more conventional reasons, i.e. their staunch defense of right-wing politics and orthodox Catholic teachings, especially with regard to sexuality, though I must say that even here they seem to encourage a mentality that goes far beyond what the Church requires: for example, Dom Bertrand (younger brother and heir of the current head of the Imperial House) reportedly refuses to even speak to divorced & remarried or homosexual people. Both Dom Luiz and Dom Bertrand are TFP loyalists, both unmarried laymen as the TFP seem to encourage, which is awkward for Brazilian monarchists who would like to present restoration of the monarchy as being in the interests of all Brazilians and not just right-wing Catholics. This is why their younger brother Antonio (who is not associated with TFP, though unlike his other brothers made a dynastic marriage) and his children have been more popular.

There is a long thread at the forum from a couple years ago that goes into some of this. See especially the posts by "Lecen," an actual Brazilian monarchist.

Interesting... I'll have to do a little digging on the TFP. Thanks.

I've been doing digging on the TFP... I don't know what to think. They support values I identify with very strongly -- monarchy, opposing abortion, opposing egalitarianism, wholistic approach to Catholic social teaching, etc. Some things about them are kind of wierd, mostly their devotion to their founder. It seems like the US branch of the organization is a little more moderate in general than the Brazilian ones.

I'll have to ask Fr. Hellmann more about them.

I know what happened. If someone from the family is interested, I can tell. Please pass it around. Thank you.

@Theodore Harvey: TFP might be something different today than its founder—Plinio Corrêa de Oliveira, leader of the conservative faction of Vatican II called the Cœtus Internationalis Patrum—originally intended it to be. His Revolution & Counter-Revolution, TFP's "founding document," does criticize Vatican II (part II, ch. 2, sec. 4a.), though.