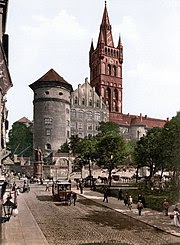 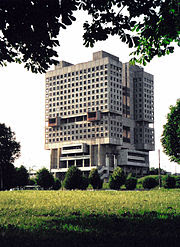 I was reading Wikipedia's article on East Prussia and was struck by two adjacent photos that I think when juxtaposed together illustrate as starkly as possible the difference between traditional Christian monarchical Europe and modern secular republican Europe, all the more so because the hideous "House of the Soviets" stands on the very site of Königsberg Castle, tragically destroyed along with so much else in World War II. Whatever its flaws, the Europe of Kings and Princes cared about Beauty and left an unparalleled legacy of magnificence, of which Königsberg Castle was but one of countless examples. The Europe of Presidents and Bureaucrats is ugly to the core, and is fittingly represented by the House of the Soviets. The French writer Anatole France (1844-1924) perhaps foreshadowed the lesson of these two buildings when he wrote, "For every monarchy overthrown the sky becomes less brilliant, because it loses a star. A republic is ugliness set free."
Posted by Theodore Harvey at 9:25 AM

A beautifully clear illustration of the issue.

That is one of my favorite quotes and the photos illustrate the truth of it. Monarchs built cathedrals, palaces and opera houses. Politicians and bureaucrats build government housing projects - ghettos. They build glass and concrete monstrosities that start to fall apart as soon as they are done. My favorite example is any one of the imperial tombs in Hue, Vietnam contrasted with the block-like Bolshevik designed mausoleum of Uncle Ho in Hanoi. It's heartbreaking.

Wonderful post. I would be immensely grateful if you could republish this at T.M.

Thanks everyone. I've posted it at TheMonarchist.