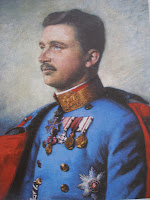 Sunday was the 90th anniversary of the death in exile of Blessed Emperor Karl of Austria-Hungary. Too good for the mad world in which he was called to reign, he strove only for peace but was abandoned by his peoples and persecuted by his victorious enemies who in trying to "make the world safe for democracy" succeeded only in making it fertile for totalitarianism. Since then the world has been remade according to the dreary soulless republican vision of the horrid 28th U.S. president and we are all the poorer for it. But monarchists will not forget him. Blessed Emperor Charles, pray for us!
Posted by Theodore Harvey at 1:04 PM