A Rant on Germany and Greece

I am sick and tired of hearing about Germany and Greece and their disgusting republics. Germany has not had a legitimate government since 1918, Greece since 1973 or arguably 1967. A plague on both their houses. Nations that abolish their monarchies are dead to me. Their miserable politicians should be forced to step down and do penance in monasteries or convents for the rest of their worthless lives. Republicanism and Democracy have failed utterly by their own standards. It is long past time for Europeans to repent of the monstrous errors of 1789-94 and 1917-18 and return to the only system that ever worked: the divinely ordained rule by hereditary Christian monarchs from the same families that built European civilization for more than a thousand years before the satanic darkness of modernity descended. Get down on your knees, Germans, and bow to Kaiser Georg Friedrich I and all the regional rulers as well. Get down on your knees, Greeks, and bow to King Constantine II. Nothing else is acceptable. Return to Altar and Throne, or suffer everlasting wrath. 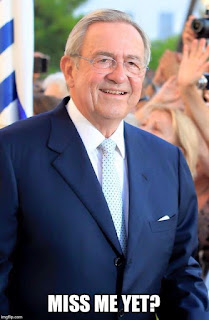 Posted by Theodore Harvey at 12:21 PM

Easy there. I understand how you feel--I hate injustice too, and I want to see restorations in Germany and Greece as well, instead of the governments they currently have. And I have a short temper myself (I know that in no uncertain terms today).

But it isn't for us to say if someone's life is "worthless" or what their penance should be, whatever they did wrong. That's something else I had to learn in the last few days, and thank God for that. I didn't realize how far wrong my beliefs were until then, and it could only have been God because it wasn't from hearing or reading anything, and it made sense with so much of the faith that I've already learned.

God bless you and be with you in all you do.

You forget to put in a new blog post about the christening of Her Royal Highness Princess Charlotte of Cambridge, Theodore.

And I'm in complete agreement with you on what you have said about Germany and Greece, that I was thinking exactly the same when my mom couldn't find anything reported of the Royal christening on the Polish news, which made me very mad and irritated that the Polish media chose to ignore this important Royal occasion and give precedence to the political and economic problems of Greece instead of what's going in the UK at the moment.

Thankfully, my aunt found the coverage of the Royal baptism on the Italian news, so I was very pleased, unlike with the Polish news, who always remembers to report on important happenings with Royal Families of Europe, such as the birth of Princess Charlotte back in May.

I didn't forget; it's just that generally I only blog when there's something specific that I want to say. I don't expect that anyone depends on my blog for royal news which is easily available anywhere. I did post plenty about the christening on Facebook.