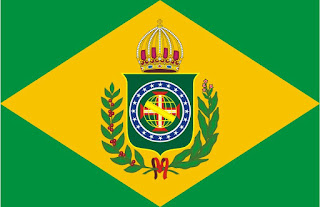 
Posted by Theodore Harvey at 6:33 PM

Nice post! By the way, today, June 6th, is birthday of our Emperor, D. Luiz I.

Being Brazilian myself, I feel somewaht glad by your visit. The shameful republic harmed us quite a lot, but the monarchical legacy was kept: Even the flag keeps the Braganza and Habsburg colors, and most - If not all - the national heroes were monarchists - Even post-1888...

Cause forced draft of thousands of citizens and the fact you could send your slave to war instead of going made the 19th century such an amazing time huh?