The central dilemma of any sort of counterrevolutionary cause, whether it's me and my fellow monarchists wanting to restore monarchies, distributists yearning for a more localist, agrarian, and organic society, environmentalists and animal welfare advocates appalled by factory farming and deforestation, "identitarians" and populists horrified by the demographic transformation of the West, traditionalist Catholics wanting to roll back Vatican II and bring back the Latin Mass, architectural traditionalists revolted by modernist buildings and cities, pro-lifers desperate to ban abortion, Christians dismayed by secularism, Brexiteers wanting Britain to be free from the European Union, or whatever it is that "Make America Great Again" was supposed to mean, is that even if we're right in principle that the way we'd like for things to be would be a more natural and satisfying way to live for many people, so many people today strongly disagree and don't see it that way that there's really no way to get back to where we want to be without massive division, anger, and even violence. That's one reason why the 20th century was so violent, and why fascism and Nazism happened: traditional civilised Christian patrician conservatism, which is what I would ideally like to identify with, was totally incapable of resisting Bolshevism, so those who hated the Russian Revolution felt compelled to turn elsewhere. I see no reason to hope that the 21st will be any better. 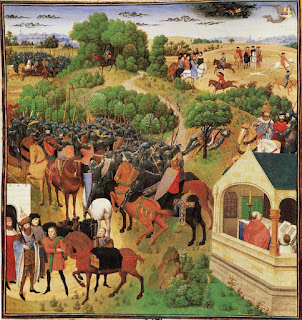 Posted by Theodore Harvey at 1:19 PM

I'd argue in a different direction: the weakened and divided Christian patrician spirit was already waning by the time Bolshevism reared its ugly head. The Great War was due to these divisions. I'd have to think had Christendom been less divided, the Kaiser would have sent aid the the Czar when the revolution game. The great war, the October revolution, etc. weren't the cause of the fall of Christendom, they were enabled by her weakened state. Much like the second Vatican council didn't come out of nowhere (all those masonic theologians didn't just materialize in 1960), the enlightenment had been doing its damage for centuries. I blame Locke and Smith more than Lenin and Stalin.

I don't disagree at all, but I think that supports what I was getting at, that by the 20th century traditional conservatism, or what was left of Christendom, was too weak to resist the revolutions.