One hundred fifty years ago today, Princess Hélène of Orléans (1871-1951) was born at York House in Twickenham, England. Daughter of the Count of Paris, Orléanist claimant to the French throne, following the fall of the Second Empire she spent most of her childhood in France, until the insecure Third Republic exiled them again in 1886 following exuberant royalist celebrations of her older sister Amélie's marriage to the Crown Prince (later King) of Portugal. Thus the Orléans family returned to England and became close to the British royal family. Hélène and Prince Albert Victor (1864-1892), eldest son of the Prince of Wales, fell in love and wished to marry, and Queen Victoria was fond of her, but the religious difference proved insurmountable.

Instead Hélène married in 1895 Italy's Prince Emanuele Filiberto (1869-1931), Duke of Aosta, a nephew of King Umberto I, whose own father had briefly reigned as King of Spain, and who was next in line to the Italian throne until the birth of Crown Prince Umberto in 1904. The marriage produced two sons, Amedeo (1898-1942) and Aimone (1900-1948), but was not happy; Hélène became known for her adventurous solo travels in Africa and for her heroic humanitarian work with the Red Cross. Her life was marked by tragedies, such as the murder of her brother-in-law and nephew in Portugal in 1908, the devastation of the two World Wars, and outliving both of her sons as well as the Italian monarchy she had served for half a century. Hélène was the grandmother of Prince Amedeo (1943-2021) who died recently, as well as two princesses who survive. Edward Hanson's biography "The Wandering Princess" is a fascinating window into a long and unconventional royal life that spanned and was shaped by the major upheavals of modern European history. 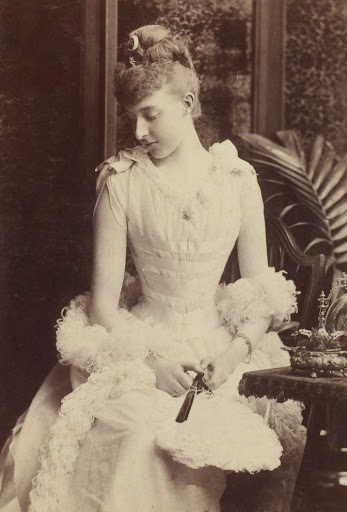 Posted by Theodore Harvey at 5:30 PM