I returned yesterday from a remarkable visit to Afghanistan, where I taught cello for a week at the Afghanistan National Institute of Music, founded by Dr. Ahmad Sarmast, in Kabul where my brother William has taught violin since March 2010. To work with the wonderful students of ANIM who are devoted to Music in a country where not too long ago (1996-2001) it was essentially illegal was an inspiring experience. At the conclusion of my visit I performed in a concert incorporating both Western and Afghan music. As Afghanistan was ruled by monarchies until 1973, the trip also included several memorable monarchical aspects which I will focus on here. 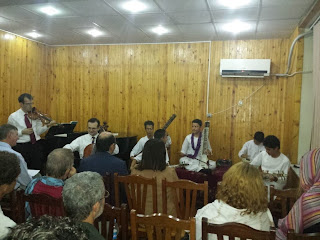 Shortly after I arrived (via Dubai) in Kabul on August 23, making the most out of our only real free day, my brother took me to see the beautiful Babur Gardens, built by Emperor Babur (1483-1530) who founded the Moghul dynasty of India (which ruled until 1857) and is buried there. A highlight was visiting his tomb: 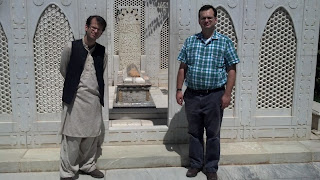 Later that day we went to see the tragic ruins of the Darulaman palace built by King Amanullah Khan (1892-1960), who reigned from 1919 to 1929 and was the first ruler to attempt (with his glamorous consort Queen Soraya) to thoroughly modernize Afghanistan, probably more quickly than was prudent. The once-magnificent palace remained in good condition in the immediate aftermath of the fall of the monarchy in 1973, but was severely damaged in the wars of the 1980s and 1990s and today lies in ruins, a haunting echo of vanished splendour. 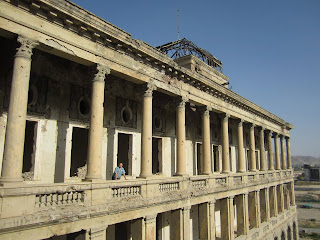 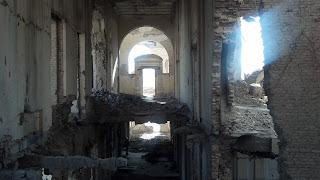 Fortunately for me, my brother's position has brought him into contact with many prominent Afghans including those members of the royal family who have returned to their country since the fall of the Taliban in 2001. So I was honoured on Sunday August 25 to meet HH Prince Nadir Naim (b 1965), grandson (via Princess Mariam Begum) of King Mohammed Zahir Shah (1914-2007), who reigned as the last King of Afghanistan from 1933 to 1973 and came tantalizingly (for monarchists) close to being restored following his celebrated return to the country in 2002 but ended up being declared "Father of the Nation" instead, a non-hereditary title he carried for the last five years of his life. Our brief conversation was interesting if a bit sad. To answer what I suspect all my monarchist friends will want to know, while proud of his royal heritage he does not see the monarchy being restored in the near future. The opportunity was in 2001-02. He reminded me a bit of Otto von Habsburg in his determination to do what he can politically anyway. He has been designated the leader of a movement of tribal elders who feel excluded from the current republic. His activities in Afghanistan prevented him from attending the Afghan-Egyptian royal wedding in Turkey on August 30 but he was pleased for his cousin Princess Noal. The sardar was intrigued by my monarchism and not unsympathetic in principle, pointing out that a president only rents, while a king takes care of the future. But this is a complicated family. It was his great-uncle Daud Khan who originally deposed the king (Daud's own cousin and brother-in-law) and declared the republic in 1973. 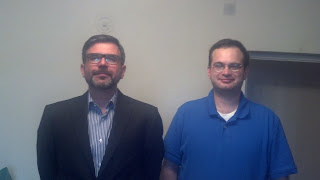 As if one royal meeting were not enough, the following evening my brother and I had the even greater honour of dining for two hours with HRH Prince Mirwais (b 1957), youngest son of King Zahir Shah. The prince, who could not have been warmer or friendlier, shared all sorts of stories including being given at age six a cowboy outfit by President Kennedy and later as a teenager teasing the guards at Buckingham Palace when his father met with the Queen. Like his late father and many other members of his family (particularly his brother Prince Muhammad Nadir, a Persian classical scholar and musician in his own right, expert in the sitar) HRH loves music and is very supportive of the work that William is doing and in which I was joining him for a week. The tie is the same one I wore when meeting Princess Irene of Greece (whose own brother was deposed by the Greek military junta the same year as Prince Mirwais's father, a tragic year for both countries) in 1999. 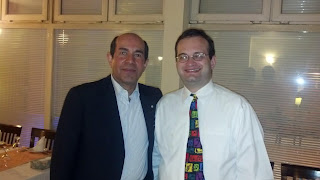 But the monarchical highlight of my visit came on Thursday August 29, an absolutely surreal afternoon. Prince Mirwais (once considered a possible successor to his father in the event of a restoration) invited William and me to the royal (now presidential) palace, where both he and President Karzai now live, as his guests. The palace is not open to the public, never seen by most Afghans or foreigners, and no photography is allowed (sorry). After passing through heavy security (slightly mitigated by the guard telling us about his music studies and singing scales while patting me down) we were received by HRH for tea in an elegant room full of portraits of his family. After a fascinating discourse on modern Afghan history, he showed us around the exquisite palace full of unique Afghan craftsmanship (some sadly damaged by the Taliban but mostly intact or restored). We saw King Zahir Shah's bedroom, study, and where he received dignitaries, and gifts given to him by other heads of state such as De Gaulle and Mao. By the time HRH took us into his father the King's changing closet and bathroom, I asked William, "is this actually happening?" He then showed us the stunning 1880-81 harem of Emir Abdur Rahman Khan (r 1880-1901), and the now unrecognizably barren smaller house where he had lived as a child while the main palace was being built, and the tiny cupboard where his brother-in-law was imprisoned after the 1973 coup. He presented us each with signed pictures of his father. The atmosphere was utterly unlike touring any other historical building as there were no other visitors and our guide was the King's son. A unique and unforgettable privilege. 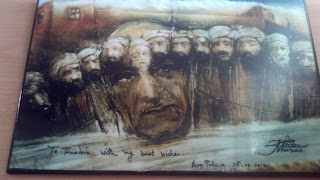 Afghanistan is probably one of the clearest of modern history's countless demonstrations of the monarchist axiom that abolishing a monarchy leads only to misery. Westerners ignorant of Afghan history might assume that it has always been chaotic, but actually under King Zahir Shah in the mid 20th century, it was a peaceful, thriving, and vibrant society in which women were free to be educated and dress in Western styles and the arts including music prospered. Prince Nadir Naim remembered a tranquil Kabul which was a favourite destination for other Asians and in which little security for the royal family was required. Since the 1973 coup Afghanistan has been physically and psychologically devastated by war and repression, particularly between 1979 and 2001. Today many young Afghans, such as those I met at ANIM, are determined to make their country a better place. I wish them well, but cannot resist adding that nothing would symbolize and facilitate a brighter future for Afghanistan more than the restoration of the monarchy.
Posted by Theodore Harvey at 10:48 AM

Thank you for sharing your extraordinary meetings in Kabul. I cannot agree more with you that - like in many other countries - the trouble began, when the Afghan Monarchy was toppled. I wish there would be someone who had the brains to undo this mistake and return the Monarchy to the Afghan people.

What an interesting blog! Thank you for sharing your experiences. I met Mirwais in Italy in 2006 and he is lovely and great to talk with. I only heard about the cowboy suit from President Kennedy - you got to see it! Wish I could go to Afghanistan. If you keep in touch with Mir, please send him my best. Happy Holidays. Meg