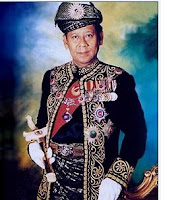 Sultan Abdul Halim of Kedah, 84, a fan of jazz and football, succeeded Sultan Mizan Zainal Abidin of Terengganu, 49, as the 14th Yang di-Pertuan Agong (Paramount Ruler) of Malaysia on December 13. Abdul Halim, who also reigned from 1970-75, is the oldest man to hold the office and the first to hold it twice. In Malaysia's unique system of constitutional monarchy, the position of head of state rotates among the various hereditary local rulers. The new king described his role as "the umbrella to the people" as "the people are the pillars of the king."
Posted by Theodore Harvey at 11:43 PM